3D microfluidic liver on a chip

Researchers in South Korea have developed a three-dimensional liver model that can recreate cell signalling within the organ. The liver on a chip could cut tests on animals by providing an accurate artificial model of how the organ responds to new drugs.

The liver contains two kinds of cells. 80% are hepatocytes and the remaining 20% are non-parenchymal cells, including hepatic stellate cells (HSCs). HSCs work with hepatocytes when the liver is damaged, playing a vital role in liver regeneration. Interactions between HSCs and hepatocytes are not well understood, but both direct cell–cell contact and short distance cell–cell signalling, called paracrine signalling, are known to be involved. Despite numerous artificial liver models, no study has yet looked at paracrine influence alone.

The team, led by SangHoon Lee, at Korea University, Seoul, has developed a new spheroid-based three-dimensional culture system. Such systems make the best mimics of natural liver cell arrangements. To create uniform three-dimensional hepatic cell structures, the chip has concave microwells. HSCs were cultured in flat wells, in separate chambers to the hepatic cells, to avoid cell–cell contacts. The different cell types were linked via connecting tubes. An osmotic pump enables continuous control over nutrient supply and waste removal. The pump also makes it possible to control the rate of nutrient solution flow. This lets the liver on a chip more accurately mimic living tissue and allows scientists to study the effect of varying the flow rate on paracrine interactions. ‘We have developed a system that integrates all of these functions onto a single microfluidic chip, compact enough to work in a culture chamber over a long term without any peripheral devices,’ explains Lee. 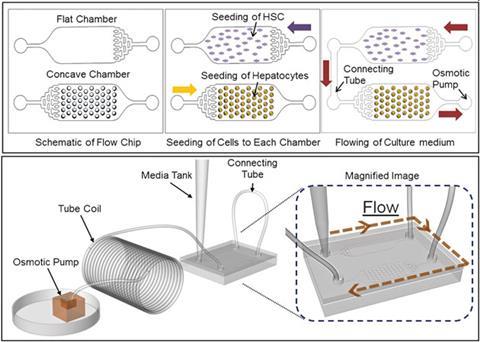 Design concept (top) and operation mechanism (bottom) of the chip

They found that short-range paracrine signalling from HSCs to hepatocytes influences and enhances liver-specific functions of the cells, rather than direct cell–cell contacts. An optimum flow rate was found at which the spheroids aggregated tightly and maintained their healthy spherical shape for longer.

Gretchen Mahler, an expert in three-dimensional modelling of tissues using microfluidics at Binghamton University, New York, US, says this microfluidic liver model holds promise as an innovative tool for high-throughput drug screening. ‘The ability to culture primary cells in three-dimensions and maintain liver-specific function for a relatively long period of time with minimal handling is an improvement over previous methods,’ says Mahler, adding that she is looking forward to a more extensive biological characterisation of the system.