3D printing has enabled US researchers to create a heart-on-a-chip system with embedded sensors, which could provide new tools for studying heart health and possibly help bring drugs to market sooner. 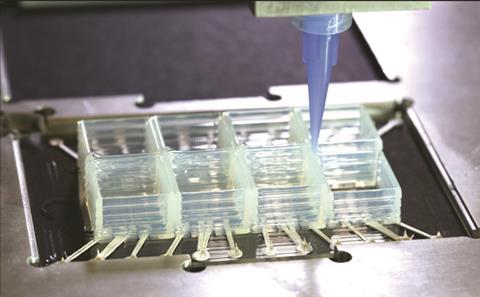 3D printing the device allows sensors to be incorporated

Organs-on-a-chip, or microphysiological systems (MPS), have gained ground in recent years as a quicker and ethical alternative to using animal models to study human disease and develop drugs. Usually in the form of a polymer slide with microchannels and chambers containing engineered tissue, MPS are designed to mimic the mechanics and behaviours of tissues or entire organs in vitro.

But as promising as they are, they rely on multistep lithographic processes which prevents rapid prototyping and customisation. What’s more, MPS models of muscle and cardiac tissue are not suited to long term studies because they lack integrated sensors. Instead they require microscopy and image analysis to measure the contractile strength of the tissues, which is labour and data intensive.

Now, a team led by Johan Lind and Travis Busbee at Harvard University, US, has developed a one-step 3D printing technique to make a simple and scalable heart-on-a-chip system that overcomes these limitations. Their system comprises six customised viscoelastic, biocompatible and electrically functional materials, or ‘inks’, that can be patterned sequentially using 3D printing. These were designed to be soft and thin enough to flex when engineered cardiac tissue grown on the system contracts or ‘beats’. These movements are translated into resistance recordings by embedded soft strain sensors, which provide continuous electronic readouts of the tissue’s contractile stress. 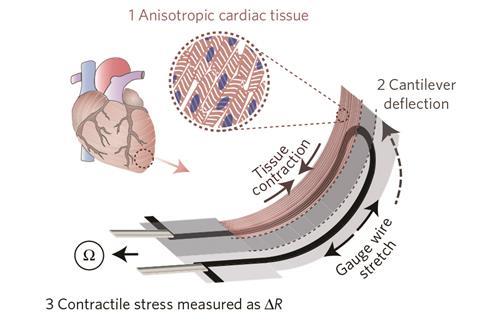 ‘Integrated sensors are critical for allowing these platforms to be scaled to the large numbers required for pharmaceutical and biomedical research,’ explains Lind. ‘Our approach allows for rapid alterations of design and for complete automation of the entire fabrication procedure, which are especially important for allowing the devices to be quickly altered and customised towards, for instance, a specific diseased cell source.’

The devices contain eight separate chambers which allows for eight different experiments to be done in parallel on a single chip. The researchers tested the biological function of the devices by showing they responded as expected to well-known cardiac drugs. They also showed the system’s capability for longer studies by investigating the gradual changes in contractile stress of cardiac tissue for a month. ‘This capability to follow slower, gradual developments makes our devices especially well suited for identifying potential harmful effects of environmental toxins at low doses,’ says Lind. The researchers caution that scale up is always an issue, but they are confident that the manufacturing model they have will help put these devices on the market sometime next year

‘This is a great example of how new digital manufacturing approaches will open up the integration of sensor elements in traditional cell culture systems and new organ-on-a-chip technologies,’ comments Peter Loskill who develops organ-on-a-chip systems at Fraunhofer Institute for Interfacial Engineering and Biotechnology in Stuttgart, Germany. ‘The versatility of the presented approach makes it very useful.’