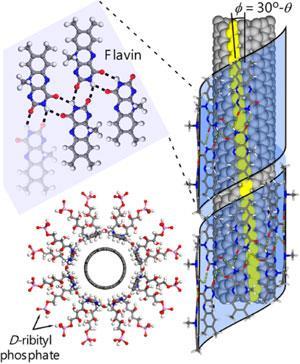 US researchers have discovered that a derivative of vitamin B2  can sort single-walled carbon nanotubes (SWNTs) according to their handedness. The discovery could be an important step on the road to being able to simply separate left- and right-handed SWNTs.

SWNTs are hollow cylindrical structures composed of a single atomic layer of graphene, which conceptually have been rolled up in one of three ways. The hexagons of the honeycomb-like sheet can match perfectly and have protruding zigzag or armchair ends, which bestow metallic properties. Alternatively, SWNTs have an off-centre match to give rise to two enantiomers, right-handed and left-handed, which display semiconducting properties.

The true potential of SWNTs can only be unlocked if they can be separated by type, chirality, handedness and length. Thus many efforts have focused on separating the different variants from a given synthesis.

The nanomaterials team, lead by Fotios Papadimitrakopoulos at the University of Connecticut, US, has shown that the naturally occurring chiral flavin mononucleotide (FMN), a phosphorylated variant of vitamin B2, can selectively choose left-handed SWNTs. ‘My laboratory has been searching, for many years, for a means to effectively disperse carbon nanotubes while keeping their extended pi-conjugation intact,’ say Papadimitrakopoulos. ‘When we stumbled on FMN, I knew I had a winner.’

‘FMN uses its directional hydrogen bonds to form helical ribbons that use SWNTs to wrap around, similar to the way a vine winds around a stick,’ explains Papadimitrakopoulos. ‘What is amazing is that the right-handed FMN helix naturally selects left-handed SWNTs.’ But what causes the selectivity? Initial results from resonance Raman spectroscopy and molecular simulations indicate the FMN helix imparts an ‘Indian-burn’ twist – compressing axially and dilating radially – on left-handed SWNTs to improve intermolecular interactions.

Nanostructural researcher Ming Zheng of the National Institute of Standards and Technology, Maryland, US, says: ‘This work adds FMN to a growing list of small chiral molecules that can facilitate sorting of carbon nanotubes by handedness. The interplay between the FMN coating and the underlying nanotube is fascinating. As far as future research is concerned, it would be terrific if tubes enriched in certain handedness were shown to give rise to other useful physical or chemical properties than just circular dichroism activities.’

The next step is to gather more evidence. ‘We need solid proof and quantification of the amount of twist that the FMN imparts on various kinds of SWNTs,’ says Papadimitrakopoulos. ‘Moreover, we need to develop applications to utilise these twists, which for all practical purposes should be reversible. This, together with the handedness selection that FMN imparts on solubilised SWNTs, can provide an opportune venue for novel structures and devices.’