A way to visualise valence electrons

In order to understand and optimise reactions, chemists would love to be able to see precisely where the valence electrons are going. But this would require an imaging technique with picometre-scale spatial resolution, attosecond (10-18s) scale time resolution and sensitivity to single electronic charges. No technique currently available offers all of these. However, physicists in China have calculated that strong-field photoelectron holography – developed to obtain static information about electronic structure – may be able to furnish scientists with this type of dynamic information.

In strong-field photoelectron holography, a powerful electromagnetic pulse ionises a sample. Some of the electrons escape the sample and are detected directly, whereas others are pulled back by the oscillating electromagnetic field and make a second flypast before eventually escaping to the detector. The interference pattern between these ‘direct’ and ‘re-scattered’ electrons can reveal information about the molecule’s electronic structure. Researchers have recently shown that states evolving with time show changes in their interference patterns on attosecond timescales, but without mathematical detail of how to extract useful information about electron dynamics.

In the most recent development, researchers at Huazhong University of Science and Technology solved the time-dependent Schrödinger equation for an electron in an evolving superposition of the ground and first excited states of the H2+ ion to show how this evolution would be detectable from the changing diffraction pattern. Monitoring such simple systems would have limited usefulness, but the researchers believe it should be possible to extract the attosecond-scale charge migration from the interference patterns even when the exact electronic states involved are not known. This would make the technique applicable to complex, multi-electron molecules. 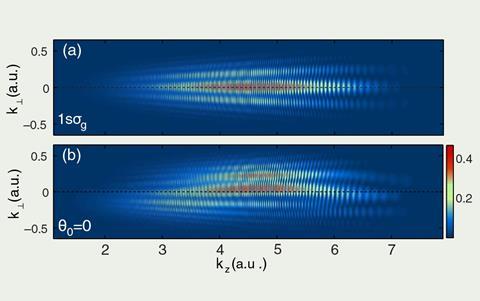 ‘People can get these photoelectron momentum distributions,’ explains Yueming Zhou, ‘but people didn’t know what type of information is encoded and how to extract this information. We’ve revealed the underlying physics.’ The researchers now intend to conduct more detailed theoretical simulations in complex molecules, and ultimately experimental tests.

Attosecond physicist Martin Schultze at the Max Planck Institute of Quantum Optics in Garching, Germany is cautiously impressed. He says the idea that the direct and re-scattered wavepackets encode both structural and some dynamical information about the electrons ’has been understood in the field for years, and some of the papers they cite even explicitly use this to gain information about structure and dynamics’.

‘If you do an experiment where you measure the full momentum distribution of all the outgoing photoelectrons, they propose a very smart way to analyse your experimental data and conclude on the structure and dynamics of your molecule at the moment of photoemission,’ he says. ‘It’s very credible, but whether an experiment can come up with it is still an open question.’