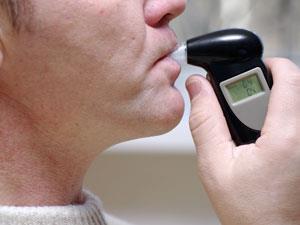 Dieters could soon be able to monitor how much fat they are burning off thanks to a portable breathalyser invented by Japanese researchers. The device measures levels of acetone on the breath, a by-product of fat metabolism. The researchers suggest that the breathalyser, which can be linked to a smartphone to display readings, could be particularly useful for adjusting diet programmes for individuals, depending on how much or little fat they burn under a given diet and exercise regime. Acetone is also produced by people with diabetes, which could also allow the breathalyser to help them to control their sugar levels.

During fasting or prolonged exercise, the body depletes its stores of glycogen in the liver and begins to metabolise fatty acids. A by-product of fat metabolism is the production of ketone bodies, one of which is acetone, which can be detected on the breath.

Now, Tsuguyoshi Toyooka and colleagues at NTT Docomo’s research laboratories in Yokosuka have invented a device capable of measuring acetone on the breath. It also takes account of other volatile compounds that can interfere with the measurement, such as ethanol, hydrogen and water vapour.

The cigarette packet-sized instrument contains two semiconductor gas sensors, one based on platinum-doped tungsten oxide, sensitive to acetone, and the other made from tin oxide, which detects the other volatiles to correct for potential bias. In a semiconductor sensor, the gas adsorbs to the surface and modifies the conductivity, with different formulations of the semiconductor behaving differently depending on the particular gas present.

The breathalyser contains a port into which a straw is inserted and through which breath is blown for six seconds. The results are sent to an Android-based smartphone either wirelessly or via a cable to provide a reading. Tests on a group of subjects showed that people on a reduced food intake and taking exercise produced more acetone than those who weren’t, and that the acetone levels measured by the breathalyser were consistent with levels read by conventional gas chromatography. The team concludes: ‘Our prototype can be used as a practical breath acetone checker for diet-conscious people, within an acceptable range of measurement error.’ Going on to add: ‘It is expected that our prototype could play a pivotal role in daily diet management and will help to prevent and alleviate obesity and diabetes.’

Experts’ views on the potential utility of the breathalyser differ. ‘The prototype device is sensitive enough to quantify breath acetone in both fasting healthy adults and diabetics,’ says Antonio Mutti, an expert in the medical applications of breath analysis at the University of Parma in Italy. ‘Preliminary experiments on healthy adult volunteers demonstrated that the prototype could be a practical breath acetone checker for diet-conscious people. Since the diet can be followed estimating the changes in breath acetone concentration, the prototype is useful in adjusting the conditions for individual programmes and to monitor diabetes.’

But Martin Lindley, an expert in diet and exercise at Loughborough University in the UK, is not wholly convinced. ‘If their intention is to measure acetone in breath during exercise to optimise exercise load and to enhance fat metabolism then, laudable as that aim may be, the data presented for their equipment would not really support any claims.’ Lindley adds: ‘My personal view is that a single variable is not capable of defining the complex biological pathways involved in fat metabolism and that currently the respiratory exchange ratio – ratio of expired oxygen and carbon dioxide – is used to estimate fuel utilisation during exercise and therefore a comparison of these data would be appropriate.’