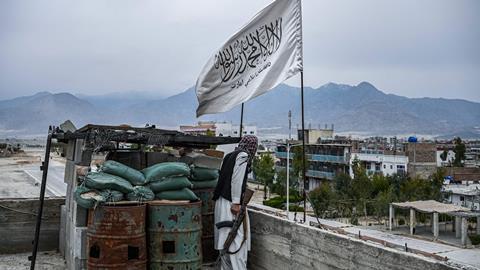 Afghan scientific expertise scattered, one year on from Taliban takeover

Afghanistan’s research infrastructure may be idling, but students and researchers who managed to escape abroad continue their work and plan to return to help rebuild their homeland

He describes the scientific research capacity in Afghanistan as ‘devastated’. Research labs are closed and women – both students and faculty – are excluded from several university campuses.

‘The infrastructure is there,’ Bickford states. ‘It’s just underutilised in some cases, when campuses such as ours remain vacant.’ He says it is a terrible mistake from a human rights and economic growth perspective to exclude 50% of the talent in the country from scientific efforts.

Robert Quinn, founding executive director of Scholars at Risk (Sar) based at New York University in the US, is also concerned that gender segregation in Afghanistan under the Taliban could effectively ban women from research labs.

The AUAF campus physically shut down on 15 August 2021, when the Taliban captured Kabul. Having switched to online instruction at the start of the Covid-19 pandemic in March 2020, the Taliban resurgence led the university to close completely for just two weeks and then continue operating virtually. Nearly all students returned to their studies remotely, although no new students enrolled.

‘This was an extraordinary expression of ambition and courage, and it echoes what happened in August 2016 when the AUAF campus was tragically and fatally attacked by the Taliban,’ Bickford recalls. That assault featured terrorists with rifles, grenades and explosives, and thirteen people were reportedly killed, including students and faculty. The university was shuttered after that attack, and when it very quickly reopened nearly all existing students returned, and then an even larger number enrolled.

The majority of students who enrolled in AUAF over the past year are located outside of Afghanistan. AUAF established several hosting relationships with universities around the world – most prominently the American University of Central Asia in Bishkek in Kyrgyzstan, and the American University of Iraq Sulaimani in Kurdistan. Both institutions received roughly 100 students from various disciplines right away . Those cohorts remain there, but Bickford says AUAF has opportunities for them to continue their studies in the US and elsewhere in the coming months.

AUAF’s primary partner in the US is Bard College in New York, which immediately pledged to host up to 100 Afghan students with full tuition, room and board scholarships. Close to that number are expected to begin studying there in the autumn, following an initial smaller cohort that arrived over the course of last autumn and spring. In the US, the university also has partnerships with Princeton, MIT, Williams College and Stanford.

Elsewhere, AUAF is poised to launch a new programme in Qatar. The first group of 100 students from Afghanistan, along with some faculty and staff, are expected to arrive by the end of this month.

The ambition, the talent, the embrace of the best global values among the younger generation is wholehearted and if not universal then very widespread

Ian Bickford, president of the American University of Afghanistan

But the reality is that millions of young and talented Afghans who remain in the country will not have the same opportunities as the refugees that left in 2021, according to Bickford. Therefore, his university is continuing to educate Afghans online.

Last spring, the university ran a successful pilot of its ability to provide online education throughout the country, enrolling 70 first year undergraduate students. In autumn 2022, 300 new students in Afghanistan – 200 of which are women – are expected to enrol at AUAF virtually. However, Leslie Schweitzer, chair and president of Friends of the American University of Afghanistan in Washington, DC, warns that internet connectivity problems throughout the country continue to worsen.

Most of the private universities in Afghanistan also have not yet reopened physically, and the Taliban government forbids women to return to these schools. Public universities in the country, which reopened in February, do allow women but they must be segregated from the men and wear clothing that completely covers them.

‘Even were higher education in Afghanistan to fully reopen, and our particular concern is that it reopens for women, the ranks of scholars, professors, teachers, lecturers, are severely depleted,’ warns Bickford.

While he says the international community – NGOs, universities and scientific organisations – did the right thing by making special provisions for Afghan scholars, Bickford notes that there has also been a ‘rapid and remarkable brain drain.’

Franklin Carrero-Martínez, senior director of global sustainability and development at the US National Academy of Sciences (NAS), estimates that up to 1000 academics, of which approximately 200 or 300 are researchers in scientific and engineering fields, have left Afghanistan since the Taliban’s takeover. 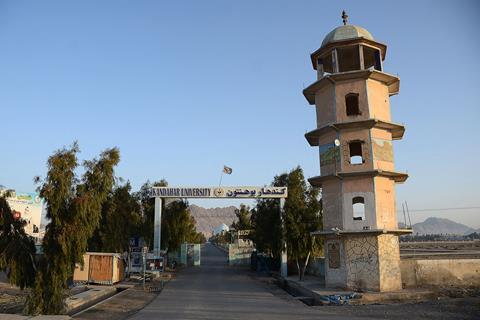 But not everyone likes the phrase ‘brain drain’ to describe what is occurring. ‘That’s a very unfair term for the dynamic that’s going on – nobody is pulling people out of Afghanistan, they’re being pushed out,’ Quinn says. He agrees, however, that there is a ‘considerable loss of intellectual talent’ from the country, and notes that it would be even greater if entering other countries was easier.

Typically, it’s at least a months-long process for people to escape Afghanistan and reach their final destination, according to Quinn. Almost everyone leaving must depart through a neighbouring country or one of the few locations with direct flights out of Afghanistan. But those places are often not particularly hospitable to long-term settlement.

‘Most people end up in a very uncomfortable middle space, full of uncertainty, full of fear that they’re going to be forced back to Afghanistan, and then somehow exposed for having tried to leave,’ Quinn explains.

One success story is the US National Academies’ Scientists and Engineers in Exile or Displaced for Development (Seed 4 D) programme, which guided five scientists and engineers and their families – 19 people in total – out of Afghanistan to Rwanda following the Taliban resurgence.

Operating behind the scenes and using pseudonyms, Carrero-Martínez and atmospheric chemist Vaughan Turekian – the executive director of policy and global affairs at the National Academies – co-led an effort to evacuate these individuals. The scientists in question were identified as under significant threat due to their involvement with the US National Academies in a US government-sponsored scientific cooperation programme. By January, they were teaching at the University of Rwanda in Kigali and advising students on research projects. Now, four of these Afghan families are in the US. 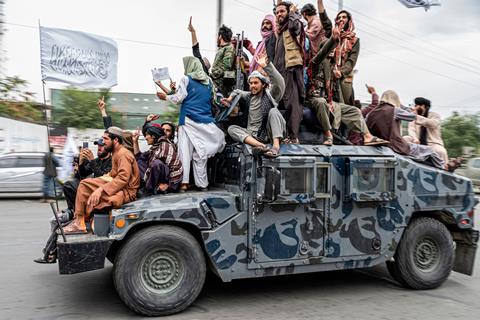 The first family to arrive in Rwanda remains there but should join the others in America shortly. The scientist in that family, who has a master’s degree in engineering and is a water engineer, has been accepted into an engineering PhD programme at a university in Boston and is slated to start studying there this coming semester.

Carrero-Martínez and Turekian’s intent was to formalise Seed 4 D as an initiative that wouldn’t just help scientists fleeing political or military conflicts, but also those dealing with things like climate emergencies that pose risks to their work and lives, such as hurricanes and flooding.

But then Russia invaded Ukraine, and NAS launched the Safe Passage Fund in March to support the Polish Academy of Sciences in its quest to help Ukrainian scholars and their families evacuate and resettle in Poland or neighbouring countries.

As part of this effort, staff from the Polish Academy of Sciences went to busy train stations in Poland, and talked to Ukranians fleeing to determine if they were scientists or engineers, and get them applications for the Safe Passage Fund. ‘You just don’t know who’s getting on a train, and they probably don’t have a sign saying that they are scientists,’ Carrero-Martínez remarks.

Beyond train station interviews, they also recruited through various networks of scientists in the diaspora. A two-tiered review process was developed to verify the identity of these applicants claiming to be scientists or engineers. Under this system, the Polish Academy vetted the applications and NAS then convened a group of internal and external experts to help confirm whether applicants have the scientific training and credentials they alleged. Next, the Polish Academy engaged its various discipline-specific institutes to match these experts with open jobs.

The first application round was exhausted very quickly. Between 40 and 60 spots were available for Ukrainian scientific or engineering experts in Poland, and those were filled in about two days, including the application receipt and approval processes, Carrero-Martínez recounts.

‘That gave us a sense of the need,’ he says. He emphasises that the Seed 4 D programme was only able to directly help five Afghan scientists, and notes that Ukraine’s scientific community is much larger than Afghanistan’s.

The situation in Ukraine remains dire, and experts agree that resource mobilisation to address that crisis has been greater than for other areas of active conflict like Afghanistan, or for other threats to scientists like government pressures.

‘During Covid-19, for example, there were some medical professionals and other scientists that were facing hardships because their efforts to educate the population were not aligned with what their government was saying, and we did not necessarily see a mobilisation of the international scientific community to go and protect them,’ Carrero-Martínez states. ‘We also know of cases of scientists in Central America that are going through some hardship because of the government, and we don’t see that same resource mobilisation.’

Bickford suggests that these crises, one after another, are connected to the rise of authoritarianism around the world. ‘Within the international NGO community, linking our efforts, is the important thing,’ he says.

For now, Afghanistan’s greatest hope of retaining its scientific expertise lies in its young people. ‘It’s unlike anything I’ve ever seen, the ambition, the talent, the embrace of the best global values – equal opportunity, pluralism, human rights – among the younger generation is wholehearted and if not universal then very widespread,’ Bickford says. Schweitzer agrees. ‘Every single [AUAF] alum that I have spoken with, and we have several right here in Washington, DC, say that they will return – that is their intent,’ she reports. ‘They can’t say when and they can’t say in what capacity, but that is their goal.’

One such student, a young woman who has earned two master’s degrees and graduated from AUAF in 2019, comes next to Schweitzer over Zoom and tells Chemistry World there is no question that she will go back and use her skills to help her country. ‘I’m just an average Afghan girl,’ she says. ‘It’s what every one of us would achieve if she has an opportunity, we all dream of serving our country and rebuilding it.’