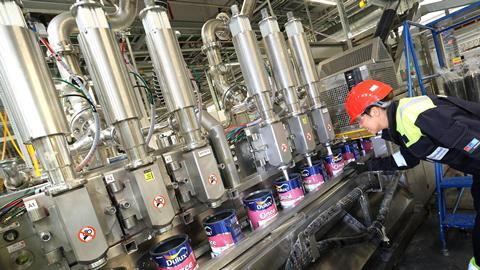 Biomass and solar-powered UK factory will recycle water and solvents, and is more flexible to reduce waste

AkzoNobel has opened what it claims will be the world’s most sustainable paint factory, with advanced production methods to cut emissions of volatile organic compounds (VOCs).

The £100 million plant in Ashington, UK, will recycle all its water and 90% of the solvents used to make paints. Instead of open vessels, as at the Slough site it replaces, Ashington’s processing is fully closed-loop. Local extraction points on the solvent-based production line mean VOCs can be extracted and scrubbed, explains head of manufacturing Jeff Hope. There has also been some reformulation so that the resins, which help paint stick to surfaces, have a flash point of 60°C compared to 40°C previously.

Solvents that can be re-used are reprocessed, while any residues will be consumed as a secondary fuel by other industries. Getting to 100% solvent re-use isn’t feasible, says Hope, because some will always be captured in the carbon bed through which it is filtered. For water-based paints, the water is flushed through a processing unit and clean water reclaimed; any solid residues are also passed on as a secondary fuel.

Some of the advances at Ashington could have been retrofitted, but Ruud Joosten, chief operating officer for paints and coatings, says that it’s more efficient to build sustainability in at the start, ’so sustainability is in the DNA of the plant’. As well as sustainable production, AkzoNobel claims a world first for its manufacturing agility, allowing the plant to make paints in very small batches if required.

Hope says AkzoNobel ‘cherrypicked what was believed to be the best technology globally,’ and then improved on it. Its own plant at nearby Prudhoe (also replaced by Ashington), pioneered rainwater harvesting for new paint manufacture, and this will be used at Ashington once all existing products have passed quality control standards. 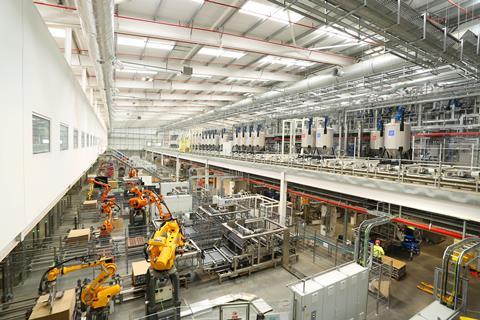 The factory lighting runs on renewable energy, and the paint will eventually be made with captured rainwater

‘Overall, the industry is pretty sustainable,’ suggests Tom Bowtell, chief executive of the British Coatings Federation. ‘Many advances have been driven by environmental performance required by the construction industry. The federation tracks key environmental performance indicators (KPIs) at manufacturing sites across the UK – which demonstrate that in the past 20 years, energy consumption per tonne of product has almost halved; water use is down by 50%; and plants now recycle 70% of waste. ‘Our KPI programme will allow [AzkoNobel] to demonstrate whether its claims stack up: we’ll see if they top the charts.’

‘You can design in certain aspects of sustainability – but it’s about people using the processes to reduce the waste,’ says Hope. ‘We’ve instilled a culture of everyone questioning: is there an alternative to binning waste; can anyone else use it?’

Energy requirements are met by a variety of renewables sources, including solar panels and a biomass boiler that burns wood pellets from managed forests in the UK. ‘The whole building is designed to use less,’ says Hope – even down to the lighting and workforce showers. AkzoNobel expects that each litre of paint produced will have a carbon footprint half that of products made at the replaced plants.

The whole site is designed in a basin so that there can be no spillages into the outside environment. Surface water can be held in an underground reservoir, so that in an emergency there would be no soil or groundwater contamination from the plant.