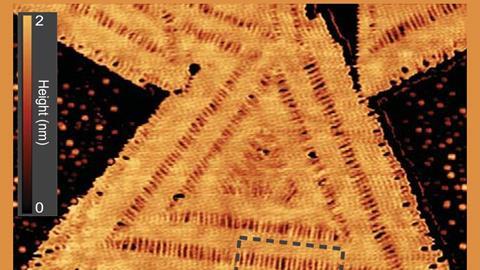 What makes crystals different from amorphous solids is their highly ordered structure; each atom is precisely arranged. Trying to join chemically distinct crystals with unequal unit cell dimensions, however, is like trying to close a zip whose two halves have different sized teeth. Nevertheless, superlattices – layered structures comprising at least two different crystals – could be used as lasers, diodes and integrated circuit materials.

Jiwoong Park and his team from the University of Chicago, US, have made the first superlattice out of two atomically thin metal chalcogenides, tungsten disulfide and tungsten diselenide. The two crystals have differently spaced atoms, which makes the superlattice highly strained. Usually, this would make it curl in on the edges, but interactions with underlying silicon dioxide keeps the entire structure flat. Tiny ripples in the tungsten diselenide bands release excess strain. 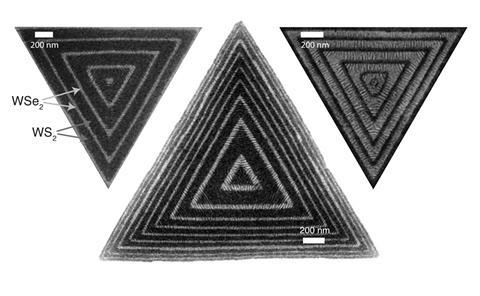 The atomic sewing method the researchers used is metal–organic chemical vapour deposition. Here, two gaseous precursors are reacted and the resulting compound is layered onto a solid support. Usually, temperature and pressure are adjusted depending on the precursors, but Park’s team kept the conditions constant, which turned out to be key for making perfect seams. By periodically changing the precursor feedstock, they could adjust the width of the superlattice’s bands, making them as narrow as 20nm.

The superlattice is electroluminescent and its optical properties depend on internal strain, which the team tuned by changing the width of the rippled tungsten diselenide bands. Such seamlessly joined multi-component materials could serve as atomically flat LEDs.

Correction: The spelling of Jiwoong Park’s name was updated on 19 November 2018.