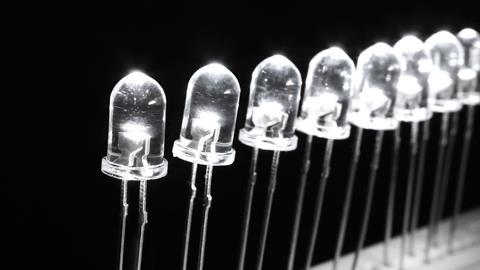 Organometallic complexes of precious metals such as iridium and ruthenium can be strongly luminescent, theoretically making them ideal for organic LEDs and dye-sensitised solar cells. Their scarcity and cost, however, makes widespread use impractical. But now researchers in the US have shown how designer copper complexes can end the need for precious metals.1

In luminous precious metal organometallic complexes, light emission occurs when electrons decay from the molecules’ triplet excited states to the ground states. This process is far less efficient, however, with complexes of lighter, more earth-abundant metals. ‘Iridium is the least abundant natural element on Earth,’ says inorganic chemist Mark Thompson of the University of Southern California. ‘If I want to find a substitute, copper has multiple problems: the first is that the lifetime of the triplet excited state is much longer – tens to hundreds of microseconds compared to around a microsecond for iridium – whereas the lifetime for recombination of holes and electrons in an LED is on the microsecond scale, so I’m not going to get an efficient LED. The second is that, in all the copper compounds studied historically, the non-radiative decay pathway outcompetes the radiative decay pathway.’

To address the first problem, Thompson and colleagues used the fact that copper complexes, like iridium complexes, have radiative singlet excited states with nanosecond lifetimes. In iridium, these have much higher energy than the triplet excited states, but the difference is much smaller in copper. By designing the complexes to minimise the spatial overlap between the singlet and triplet states, the researchers brought these energies as close as possible. This allows electrons in the triplet state at room temperature to move to the singlet state under thermal energy alone, before emitting a photon as they decay to the ground state. This is called thermally activated delayed fluorescence.

More significantly, the researchers achieved almost complete suppression of the non-radiative decay pathway. ‘If you can deform the molecule in the excited state, you can easily transition to the ground state without emitting a photon,’ explains Thompson. To prevent this, the researchers used bulky cyclic (alkyl)(amino)carbene and nitrogen bound amide ligands, fixing the molecules into a linear configuration. As a result, they found that over 99% of the electrons promoted to an excited state resulted in photon emission. ‘We’ve demonstrated that you can make a copper compound behave as though it were an iridium compound for all practical purposes,’ says Thompson.

Inorganic chemist Kenneth Wärnmark of Lund University in Sweden, whose group recently demonstrated the first example of photoluminescence from iron complexes2, notes that, though thermally activated delayed fluorescence has been used before in organic LEDs, the very high radiative recombination rate is new in copper complexes. He cautions, however, that such complex, bulky ligands could present a significant hurdle to commercialisation in themselves. ‘The labour involved in producing these sorts of ligands costs a lot: that’s an issue to be addressed,’ he says. ‘This is a step towards the use of earth-abundant metals in photofunctional materials, but it’s not the step.’