Other materials can be made into ultra-thin nanosheets. Jon Evans finds out whether they can generate the same buzz 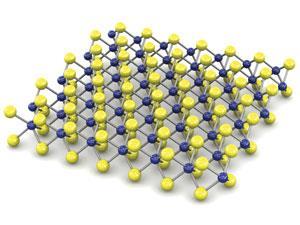 For the past decade, graphene has been the undisputed champion of the material world. This single atom thick layer of carbon is the thinnest known material and the strongest ever measured; it is also a much better conductor of electricity than copper, able to sustain a current density six orders of magnitude higher. It has already netted its discoverers, Andre Geim and Konstantin Novoselov at the University of Manchester in the UK, a Nobel prize in chemistry and is predicted to transform a suite of different technologies, from computing to coatings to chemical sensors.

The problem with being a champion, of course, is that you’re always being challenged by upstarts looking to usurp your position, and this is beginning to happen with graphene. Like graphene, these upstarts are two-dimensional crystals consisting of a thin layer of atoms, and while they possess many of the same properties as graphene they also boast a couple of new ones. Although they haven’t yet succeeded in pushing graphene off its perch, they’ve certainly managed to muscle their way on there as well.

‘When people were getting a bit tired with graphene, two-dimensional crystals appeared and brought a new rival into the area,’ says Novoselov. Far from being a threat, however, these new rivals could end up being the making of graphene.

It was actually Novoselov and Geim who first showed that the same process they used to produce graphene, which involved carefully pulling a single layer of graphene from a lump of graphite with a piece of sticky tape, could also produce other two-dimensional crystals. In a 2005 paper,1 they reported using this technique to produce a range of two dimensional crystals from materials with a similar layered structure to graphite, including molybdenum disulfide (MoS2), niobium diselenide (NbSe2) and boron nitride (BN). 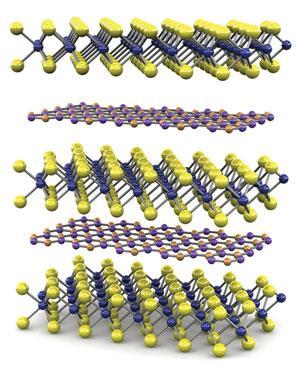 For the first few years, graphene received almost all the attention, but now scientists are beginning to turn to these other two-dimensional crystals, particularly the transition metal dichalcogenides. As their name suggests, these are made up of transition metals such as molybdenum, tungsten or niobium linked with chalcogens such as sulfur or selenium.

Unlike graphene, these compounds don’t actually consist of a single layer of atoms. Rather, they comprise a layer of transition metal atoms sandwiched between two layers of chalcogen atoms. However, the atoms in these three layers are strongly held together by covalent bonds, whereas each three-layer sheet is only linked to its neighbours by weak van der Waals bonds, allowing individual sheets to be separated from each other.

Despite the different atomic structure, transition metal dichalcogenides share some of graphene’s impressive properties, driven by the fact that they are essentially all surface. Both are obviously very thin, although graphene is thinner, and both are very strong, although graphene is stronger. They also share some of the same challenges, especially in terms of finding methods to produce them at large scales. Painstakingly peeling individual two-dimensional sheets from a three-dimensional crystal, known as mechanical exfoliation, clearly does not lend itself to mass production.

For transition metal dichalcogenides, better methods include chemical exfoliation, in which three-dimensional crystals are sonicated in solvents to release individual sheets, and chemical vapour deposition (CVD), which is already commonly used to produce carbon nanotubes. CVD involves passing one or more gases containing the component elements over a flat substrate, where they react together to form the two-dimensional crystal. One problem with these methods, however, is that the sheets they produce often aren’t as pristine as those produced by mechanical exfoliation, tending to contain more defects.

In some cases, this means that certain transition metal dichalcogenides can do exactly what graphene does, only slightly better. For example, individual sheets of graphene are effective chemical sensors, able to detect chemicals via two different mechanisms. The first involves the change in electrical conductivity caused by compounds adhering to the surface of a graphene sheet. The second involves using it as a resonator: if suspended, graphene will naturally vibrate, or resonate, at a specific frequency, which changes when a chemical adheres to it.

Scientists have recently discovered that the same thing happens with other two-dimensional crystals. In 2013, Philip Feng and his colleagues at Case Western Reserve University in Cleveland, US, showed that suspended sheets of MoS2 can actually vibrate faster than graphene, suggesting they could make even more sensitive sensors.2

Feng is also looking to enhance the sensing abilities of MoS2 still further, by combining the resonator and conductivity detection mechanisms; he is helped in this aim by the fact that MoS2 is a semiconductor. ‘By combining the attractive coupled electro-mechanical properties, we hope to develop interesting sensors with more integrated functionalities,’ he says.

In other cases, it means that transition metal dichalcogenides can achieve feats that are simply not possible for graphene. For example, unlike graphene, transition metal dichalcogenides have catalytic abilities, with MoS2 being able to catalyse hydrogen evolution reactions. Studies have shown that it’s the edges of MoS2 sheets that are responsible for this catalytic activity, which is usually fairly weak.

Recently, however, materials scientists from the US and Korea, led by Jiaxing Huang at Northwestern University in Illinois, have managed to increase the catalytic activity of both MoS2 and tungsten sulfide (WS2) by depositing gold nanoparticles on them.3 They do this by simply mixing chemically exfoliated sheets of MoS2 and WS2 with hexachloroauric acid in water, with the sheets reducing the acid and causing gold nanoparticles to form on their surface.

Interestingly, this process works best with sheets possessing lots of defects, as the gold nanoparticles preferentially form at defect sites such as sheet edges and grain boundaries, where the three layers making up individual sheets don’t quite line up with each other. Huang and his team found that covering sheets of MoS2 and WS2 with gold nanoparticles in this way greatly enhances their ability to catalyse hydrogen evolution reactions.

Huang says this increase in catalytic activity is probably due to the gold nanoparticles enhancing charge transport between different sheets, which suggests that these gold-covered sheets should be able to catalyse any electrocatalytic reactions. In addition, Huang thinks the same basic approach could be used to cover the sheets with various other nanoparticles, potentially allowing them to catalyse other types of reactions. 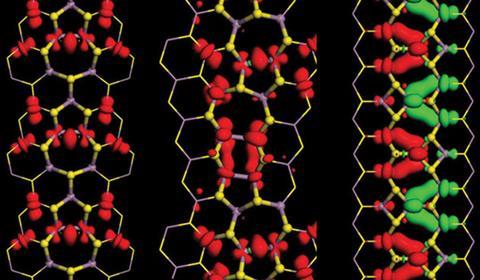 Yakobson’s team was conducting theoretical studies on the grain boundaries that form when transition metal dichalcogenides are produced by CVD. This revealed that the boundaries should display a small magnetic moment, caused by the spins of the electrons in the vicinity of the boundaries aligning with each other. ‘It doesn’t matter how you grow them,’ explains Yakobson. ‘These misoriented areas eventually collide, and that’s where you find topological defects. It turns out that – and I like this mechanistic metaphor – they squeeze magnetism out of nonmagnetic material.’ Graphene also possesses grain boundaries, but Yakobson’s calculations suggest they aren’t magnetic, due to graphene’s conductivity and single-layer structure.

The next step is to detect this magnetism experimentally, which is far from easy at these small scales. So Yakobson is now looking to collaborate with a team from Tsinghua University in Beijing, China, to obtain this experimental proof. If they do find it, this will offer further evidence that transition metal dichalcogenides are actually better positioned than graphene to transform computing.

Modern computing is built on the semiconducting properties of silicon; in particular, its ability to allow current to pass under certain conditions but not under others. This allows the creation of the switch-like transistors that physically underpin the digital world’s ones and zeroes.

The problem with graphene is that it isn’t a semiconductor, it’s a very efficient conductor: a switch that can’t be turned off. Graphene can be transformed into a semiconductor by chemically modifying it or by physically deforming it, but transition metal dichalcogenides such as MoS2 are natural semiconductors. Find a way to construct transistors out of them and you can shrink computer circuits down to atomic scales, a feat that would be impossible with conventional silicon-based technology.

If transition metal dichalcogenides turn out to be magnetic as well, then that raises the possibility of using them to develop a whole new type of computing, in which the digital ones and zeroes are encoded in the spin states of electrons, rather than in electric charge. Known as spintronics, this switching between spin states can be achieved with an applied magnetic field and should offer much faster computer processing.

Some scientists have even suggested that transition metal dichalcogenides could form the basis for yet another new type of computing, known as valleytronics. Electrons travel through crystals in waves, with these waves located in certain valleys of minimum energy. In valleytronics, the idea is to switch electrons between two different valleys as a way to encode the digital ones and zeroes. Rather handily, MoS2 possesses two such valleys and a couple of research groups recently showed that it was possible to switch electrons between these two valleys using polarised light.5

Life in the old graphene yet

All is not lost for graphene, though, because although modern computer circuits are built on semiconductors, they also require conductors and insulators. Thus, if you want to construct an atomic-scale circuit from transition metal dichalcogenides, you’ll also need to use graphene as the conductor and maybe boron nitride as the insulator.

This is exactly what Andras Kis and his colleagues at the Swiss Federal Polytechnic School in Lausanne have done. In 2011, they created a transistor consisting of a single layer of MoS2 as a semiconducting channel between two gold electrodes,6 before then replacing them with two graphene electrodes. Most recently, by placing a third layer of graphene on top of the MoS2 layer to act as charge trapping device known as a floating gate, they created a nonvolatile memory cell.7 Kis and his colleagues have already started to connect a few of these transistors and memory cells together to form simple circuits. 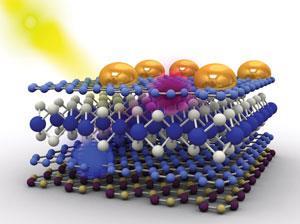 This is where Novoselov’s interest currently lies. ‘We use combinations of different materials and each of those materials plays its own role,’ he says. ‘The types and sheer number of physical phenomena which we observe by combining several crystals are really exciting and quite promising in terms of applications.’

Graphene is naturally transparent and so the two graphene sheets allow light to pass through them to the semiconducting WS2 sheet. As is the case with silicon, when light hits the WS2 sheet, it generates electron·hole pairs. The electrons and holes are immediately attracted towards different graphene sheets, as one sheet is negatively charged while the other is positive, pulling the electron·hole pairs apart and generating an electric current.

In developing such heterostructures, scientists already have a lot of two-dimensional crystals to choose from, with graphene and the many different transition metal dichalcogenides, but new two-dimensional crystals continue to appear. Over the past few years, several research groups have claimed to produce atom-thick layers of silicon, termed silicene, while US scientists recently predicted that an atom-thick layer of tin – dubbed stanene – will be a topological insulator with lossless electronic conduction zones.

If this continues, graphene’s perch could soon become rather crowded.