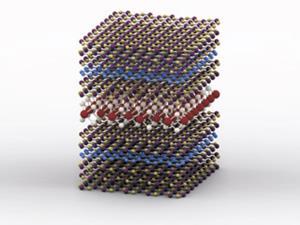 Ultrathin, flexible and semi-transparent LEDs made from a mix of different atom thick materials have been created by researchers in the UK and Japan. Beyond their scientific importance, the researchers believe the design could have significant commercial potential. Other researchers agree, but says that a suitable method for producing the devices is still needed.

Since graphene’s remarkable electrical properties were discovered, other monolayer materials followed whose electrical properties are often very different. While graphene is an excellent conductor, boron nitride is an insulator and some transition metal dichalcogenide (TMDCs) monolayers are semiconductors. Several research groups have developed simple van der Waals heterostructures, such as tunnelling transistors, by combining multiple layers. Now Konstantin Novoselov, who shared the 2010 physics Nobel prize with Andre Geim for their discovery of graphene, and colleagues at the University of Manchester, have produced LEDs using the most complex monolayer heterostructures ever created.

The researchers’ new design uses quantum wells - narrow regions of semiconductor confined between two layers of an insulator. In a quantum well, electrons can occupy only discrete energy levels and the spacing of these levels depends on the depth of a well. By tailoring the energy levels appropriately, an electron recombining with a hole can be made to emit a photon of a desired frequency in a process called electroluminescence. In their first design, the researchers created electroluminescent quantum wells by sandwiching mechanically exfoliated monolayers of TMDCs between boron nitride and adding graphene. The result was a functioning LED around 10µm long that still worked perfectly after months of periodic testing.

The quantum efficiency of these single well designs was about 1%. To reduce the number of electrons and holes escaping the devices, the researchers fabricated devices containing multiple quantum wells, either of the same or of different TMDCs, sandwiched between a single set of graphene electrodes. This increased the quantum efficiency to a maximum of 8.4% - similar to the best organic LEDs. They also demonstrated the flexibility of their ultrathin LEDs by fabricating them on thin plastic films that they then bent and twisted.

The team are now exploring the devices further. ‘Putting in several quantum wells is not only an exercise to enhance the efficiency,’ explains Novoselov. ‘It also shows that we can create more complex heterostructures.’ As a simple example of the possibilities, he cites multi-colour or white LEDs.

Solid state physicists Xiaodong Xu of the University of Washington, US, and Anthony Hoffman of the University of Notre Dame, US, agree that semiconductor quantum wells in monolayer materials have great potential for new devices. ‘You’re giving scientists and engineers a toolbox they can now play with,’ says Hoffman. ‘And with that toolbox they can realise improvements in performance.’ Xu agrees but cautions that scaling up production will require innovative engineering. ‘You’d need to design chemical vapour deposition systems that can deposit multiple different layers,’ he says. ‘All of these layers may require different conditions, so if you want to deposit layer by layer you’d need to switch between conditions without breaking the vacuum.’