Solar panel slims down to a few atoms thick 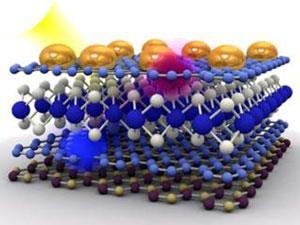 An international team of researchers has constructed an atom thin photovoltaic device with unusually high quantum efficiency – a measure of the photons converted into charge carrying electrons – of 30%. The structure consists of a sandwich of a semiconducting transition metal dichalcogenide (TMDC) and sheets of graphene. The work extends the range of new ‘heterostructures’ based on two-dimensional atomic crystals being developed by materials scientists and could lead to new types of flexible solar cells or phototransistors.

TMDCs are layered materials consisting of a triangular lattice of transition metal atoms sandwiched between two triangular lattices of chalcogen atoms – sulfur, selenium or tellurium. They are known to have potent photon–electron interactions because of the presence within the lattice of Van Hove singularities – a quantum mechanical feature which makes electrons peculiarly susceptible to external perturbations, such as stimulation by light.

‘Layer by layer we constructed a sandwich of atomically thin components,’ says team member Antonio Castro Neto of the University of Boston, US, currently working at the National University of Singapore. Boron nitride forms the outer layer, as an insulator and protective film; the next layer consists of graphene as a tough, transparent and flexible conductor; and the TMDC is the ‘meat’ of the sandwich. As light hits the TMDC it dislodges electrons, which are collected by the graphene electrodes, ready to be harnessed for carrying out work. The scientists also discovered that peppering the graphene surface with gold nanoparticles enhanced light absorption. 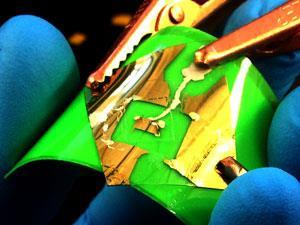 The new solar cell is a sandwich of atom thin materials

‘Overall the device is no thicker than about 20Å,’ says Castro Neto. ‘We wanted to see if something this thin could efficiently produce an electric current, and we showed that even something a few atoms thick can turn 30% of the energy of photons into electricity.’

‘I think TMDC should make very good transistors, since the off current should be able to be very low – single atomic layer – and the on current should be very high due to high mobility,’ says Henry Snaith, a photovoltaics expert at the University of Oxford, UK. ‘In addition, the possibility to interact with light makes phototransistors, and hence highly sensitive photodetectors, very possible.’ Snaith is less convinced that the system will result in new solar cells as stacking the devices will cut their efficiency.

Castro Neto says that the next step is to investigate other two-dimensional semiconductor crystals in the system to further increase its efficiency. They also plan to look into other combinations of materials to create novel heterostructures, as well as to engineer the system to improve the performance.