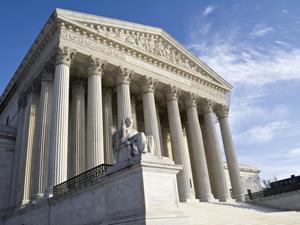 The US supreme court has quashed the conviction of a microbiologist jailed on chemical terrorism charges by weighing in on a bizarre love triangle.

Carol Anne Bond made use of her training and employment at a chemical company when she sought revenge on her best friend in 2006 for having an affair with her husband and bearing his child.

Bond stole the arsenic compound 10-chloro-10H-phenoxarsine, which can be deadly if ingested, from the Philadelphia site of speciality chemical manufacturer Rohm and Haas where she worked. She also bought from Amazon a vial of potassium dichromate, a chemical commonly used to print photographs or clean laboratory equipment that can be fatal if swallowed and can cause skin irritation and sores when handled.

Subsequently, Bond went to her victim’s home at least 24 times between November 2006 and June 2007 to spread the chemicals on her car door, post box and door knob. These attempted assaults were ‘almost entirely unsuccessful’ because the chemicals that Bond were applied were clearly visible, the court noted in its 2 June decision. The victim apparently avoided these crude poisoning attempts all but one time, when she suffered a minor chemical burn on her thumb.

After the victim reported these incidents to the police, postal inspectors placed surveillance cameras around her home. The footage showed Bond opening the victim’s mailbox and stealing a letter.

The language in this treaty defines a chemical weapon as a ‘toxic chemical’ that can cause death, temporary incapacitation or permanent harm to humans or animals. The provision specifies that the origin or method of production of such chemicals is irrelevant.

Bond asked a lower court to dismiss the chemical weapons conviction, but a lower court denied her motion and she was sentenced to six years in prison in 2008.

But the supreme court threw out the chemical weapons conviction: ‘In sum, the global need to prevent chemical warfare does not require the federal government to reach into the kitchen cupboard, or to treat a local assault with a chemical irritant as the deployment of a chemical weapon,’ said Chief Justice John Roberts, in the decision.

Roberts concluded that the two chemicals Bond used might be considered weapons if used, for example, to poison a city’s water supply. He said the substances that Bond used don’t resemble the ‘deadly toxins’ that are covered by the Chemical Weapons Convention. Prosecuting her crimes under that statute would give the treaty a reach that ‘far exceeds’ congressional intent.

‘The sensible thing would have been to charge her under state law with battery or reckless endangerment,’ says David Golove, a constitutional law specialist at New York University School of Law, US. If the supreme court hadn’t reversed the charge, Golove says many other treaties could have been opened up for constitutional review – including those covering the environment and human rights.

If read literally, the words of the Chemical Weapons Convention statute in question would make virtually any ‘non-peaceful’ use of toxic chemicals a crime, including poisonings traditionally handled by local authorities, according to Golove.

As a result of the supreme court’s decision, there could be some guidance to Congress about how to write statues, and some defence lawyers might argue that certain types of statutes shouldn’t be applied to their clients, according to Illya Shapiro, a senior fellow in constitutional studies at the Cato Institute, a libertarian thinktank.