The American Chemical Society (ACS) has created a global code of ethics for chemists based on the Hague Ethical Guidelines developed by the Organisation for the Prohibition of Chemical Weapons. 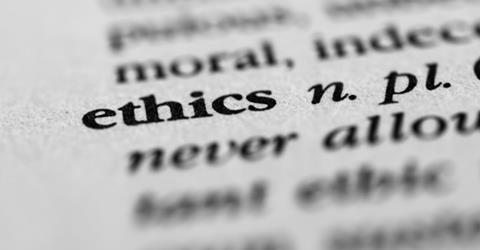 ‘To help determine categories to cover in the code, inputs from chemistry professionals in five countries were gathered about everyday situations they face where an ethical dilemma might arise,’ says Kabrena Rodda, technology and policy integration specialist at Pacific Northwest National Laboratory in the US, who co-organised the initiative with the ACS and the US State Department’s Chemical Security Program.

The questions that were asked include: ‘How do you restrict access to dual-use chemicals?’; ‘If you discover a chemical spill caused by someone else, what action should you take?’; and ‘How should you handle a situation where someone senior asks you to do something you feel is not appropriate or ethical?’

[[Ethics education must be an integral part of chemistry education so that practitioners understand that ethics is an integral part of sciences]]The responses were then used as discussion points as the GCCE was drafted over two days. All the meeting participants voluntarily adopted the code and are now being encouraged to share it with colleagues in their home country. It is hoped that scientists everywhere will either adopt the GCCE as is or use it as a starting point for discussions about ethics so that institutions in different countries can adapt the code to address any local issues. ‘If they already have codes of ethics (which are aspirational) or codes of conduct (which are enforceable) in place, there is still benefit to reviewing their existing codes to ensure the code addresses the key elements of The Hague Ethical Guidelines as the GCCE does,’ says Rodda.

As adopting the GCCE is voluntary, there will not be any kind of enforcement or body making sure people actually follow it. But Rodda says that if an organisation or country wishes to encourage chemistry professionals to adopt the GCCE, they could incorporate it into their own regulations. ‘The GCCE is aspirational and not a regulation … it can be thought of as a tool for shaping the intent of the individual, to give teeth to the regulations that an institution of country may have in place as they encourage the responsible practice of chemistry,’ she adds.

The organisations involved are planning to make the code publically available in several different languages now that the draft has been finalised.

Jeffrey Kovac, an expert on chemical ethics based at the University of Tennessee, US, says the GCCE is a good starting point for an international discussion of ethics in chemistry. ‘[It] is less a code of behaviour than a statement of moral ideals or moral principles. One of its strengths is that it has some pretty strong statements about the environment and sustainability,’ he says. But he adds that there is still room for improvement. ‘It does not provide any clear guidance as to how to make a decision, particularly when there might be a conflict between two of the ethical principles. Which ones are most important?’

Correction: The story was corrected on 27 May 2016 as the Global Chemists’ Code of Ethics is finalised.