8 November 2019 started like any regular Friday for the residents of Kisela Voda, a suburb of the Macedonian capital, Skopje. However, during the morning, people began complaining to authorities of a bad small, burning eyes and itching throats. Soon afterwards, the cause was discovered – a methyl acrylate spill during cleanup of a site owned by the defunct chemical company OHIS.

The spill happened during what was supposed to be routine treatment of chemical waste from the abandoned plant. By the afternoon, the police and the army were on site, making sure that the situation didn’t get out of hand. Fortunately, the incident didn’t cause any casualties, with authorities reassuring local residents that there was no immediate danger. However, in the days that followed, there was a startling revelation about the site – the amount of toxic waste present at the facility makes it a huge potential hazard.

The OHIS plant tops a list of North Macedonia’s 16 most critical environmental hotspots, as compiled by Trajce Stafilov from the Institute of Chemistry in Skopje. At one time, OHIS (which was majority-owned by the state) operated five large factories, manufacturing various cleaning products, insecticides, pesticides, and cosmetics that were sold all over the Balkans. 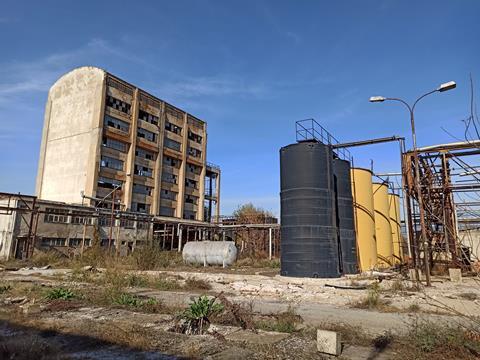 The former OHIS plant in Skopje was abandoned, leaving large amounts of waste, as well as open-air contaminated landfills

A few years ago, the company went bankrupt. Its plants are now abandoned, but the surplus chemicals and untreated waste left behind present significant problems for the local authorities. For example, there are two landfill sites that contain thousands of tonnes of soil contaminated with large amounts of the insecticide lindane (gamma-hexachlorocyclohexane) and its isomers (collectively referred to as HCH). One of these landfills, located about 6km from Skopje’s city centre, has been left open for decades. Local authorities are yet to find a waste handler to deal with the lindane landfills, and until they are properly cleaned up, the potential consequences from lindane exposure could be severe, civic activists warn.

There are landfills from industrial production of pesticides and other chemicals, tailings from ore processing, tolls from metal production in metallurgical factories, refinery work, cement production, waste ash from thermal power plants, and others

‘Lindane and other isomers of the same chemical, present in large quantities in OHIS, fall into the category of persistent organic pollutants, which means they persist in the environment and are transmitted through the food chain,’ says Davor Pehcevski from Skopje-based citizens’ association Eko-svest (Eco-sense). ‘The fact that the landfill with these chemicals is out in the open means that we have been exposed for a long time and the lindane is constantly accumulating into our bodies. The health consequences, especially for young people, could be very serious and each day of delay is only increasing the chances of illness,’ he adds.

After several years of planning, partial remediation of the plant area started in November 2019. Almost immediately, the effort ran into difficulties. Waste management and recycling company EkoCentar 97 was appointed to handle and treat 11 different types of hazardous waste that have been identified at the site. Company workers began transferring methyl acrylate into temporary containers, ready to be transported offsite for disposal. As they were getting ready to have the old storage tank cleaned and decontaminated, a valve inside it broke, releasing the residue. Despite the accident and the criticism that followed, the company remains fully committed to completing the decontamination process, for which they now have an additional four months.

‘We entered a dark tunnel, with very little clear parameters needed for our work,’ Sanja Momirovska from EkoCentar 97 tells Chemistry World. ‘But we expect to come out of the tunnel as a company that is proud of what it has achieved, and to remove and permanently destroy chemicals and substances from OHIS.’ The company is now working to arrange transport of the collected chemicals to an incinerator in Switzerland.

According to environmental activists, this incident is only a warning for Macedonian authorities on the risks that could follow during the remediation process. ‘The OHIS incident has revealed decades-long neglect of the remnants of the former factory, as well as an underestimation by authorities about the danger to whole neighborhoods, and Skopje in general,’ says Eli Peseva from the O2 Coalition, which comprises organisations campaigning against pollution. ‘The good news, if it could be considered like that, is that the public has learned that a procedure for the disposal of hazardous chemical waste is underway,’ she adds.

‘There are also questions regarding how this waste will be transported out of the factory, since there are no longer any railways near the plant. So, the only option is to transport it by road,’ Peseva adds. 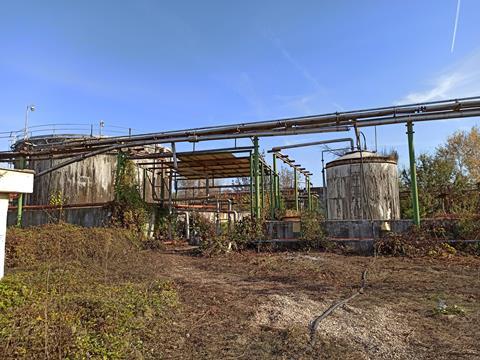 Finding the funds to clean up these sites is a challenge for non-EU member countries that can’t access the special funds available to members, but there are other sources of support available

Suzana Andonova from the persistent organic pollutants unit within the Macedonian Ministry of Environment and Physical Planning, says that their team has been working on the problem for more than 9 years – including planning and researching the best way to deal with the various different types of contamination and waste on the site. At this point, raising awareness among local residents remains a priority.

‘We will need all relevant institutions and stakeholders, including the citizens, to be fully coordinated in order to carry out the whole process as planned,’ Andonova tells Chemistry World. ‘We are pleased that the general public’s awareness of the environment in general is at a much higher level compared to 2005–2010, when we began our activities around the HCH-contaminated landfills and soil contamination in OHIS.’ However, there is a long way to go. Just the remediation of the plant’s smaller landfill could last up to 30 months, she noted.

The OHIS issue is only a part of the problem for Macedonian authorities, since there are many more hotspots that need to be remediated. ‘Most of these hotspots are the result of industrial activity in the past when environmental standards either did not exist or were very flexible,’ Stafilov explains.

‘There are landfills from industrial production of pesticides and other chemicals, tailings from ore processing, tolls from metal production in metallurgical factories, refinery work, cement production, waste ash from thermal power plants, and others,’ he adds.

Similar problems extend across the Western Balkans region. For example, in the small, central Serbian city of in Krusevac, Serbia, locals have complained of noxious smells coming from a site belonging to another former chemical giant, Zupa Chemicals.

The odours have been emanating from facilities within the old Zupa compound, now owned by Bin Commerce, since September. The company manufactures xanthate salts and claims that the stench is not toxic, but merely a side-effect of the production process. While health inspections have confirmed these claims, Krusevac residents remain worried, especially considering the state of the area around the compound. The Zupa site, like OHIS in North Macedonia, tops Serbia’s list of 14 critical environmental hotspots. Most of these hotspots are due to increased industrial production and ineffective waste handling policies. Both countries are also struggling with high air pollution levels, especially during winter.

Since Serbia and North Macedonia are seeking EU membership, their authorities need to pay a lot more attention to European standards regarding environmental protection, says Emina Rustemoska, an EU environmental law expert at St Cyril and Methodius University in Skopje. ‘Chapter 27 (Environment and climate change), may prove particularly critical in the negotiation process, even delaying the process for a country to become a member state,’ she explains. ‘This is because this chapter is one of the most complex and expensive chapters for implementation (going into other areas such as agriculture, energy, and transport), and it covers almost a third of the EU’s total legislation.’

‘If the new European commission’s focus on climate change is also considered, then we need a well-planned budget, as well as strong commitment to environmental issues and climate change adaptation [from government agencies],’ Rustemoska says, adding that EU recommendations also call for bigger investment in prevention measures and environmental protection.

Budget and financing plans are a part of the reason countries in the region are unable to deal with these problems as smoothly as Western countries, Stafilov says. Resolving these problems generally requires huge financial resources. And while special funds are available for EU member states – to conduct solution studies and undertake actions to prevent further negative impact – non-members cannot access such funds. ‘Of course, domestic [government] institutions should be responsible for such activities, and need to provide appropriate funds,’ Stafilov tells Chemistry World. But this will almost certainly mean the process is more gradual and takes longer unless other sources of support can be tapped.

However, there are positive examples to learn from in the region, which can be seen as a testimony to the impact of remediation. For 18 years, a railway station on the shore of the Skadar lake, near the city of Bajza in Albania, was used to store hundreds of tonnes of hazardous chemicals and pesticides, many of which had been banned in the EU since the 1980s. During this time, the site was one of the most problematic hotspots in Albania.

The remediation of the area was carried out by a UK company and took 17 months. By 2010, the site was completely free of hazardous waste. While Albania still has its fair share of environmental hotspots, the Bajza case offers hope, that with careful planning and sufficient funding (in this case the United Nations Development Programme and the Dutch government played an important role), there are ways to deal with many of the similar problems facing states in the Balkan region.