Best sighting yet of exotic crystals composed entirely of electrons 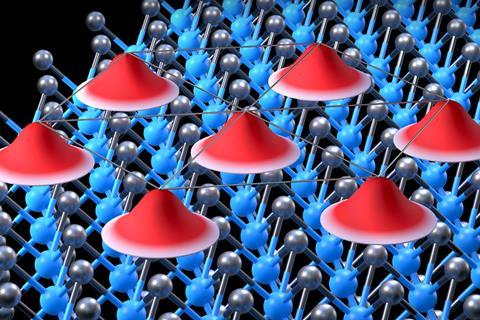 Exotic electronic states called Wigner crystals, in which mutual repulsion between electrons causes them to spontaneously form ordered arrangements, have been observed independently by two groups nearly 80 years after they were first predicted. The researchers argue their results, using a new type of spectroscopy, are more conclusive than previous observations.

Electrons in a material carry both potential energy from their mutual repulsion and kinetic energy arising from heat, much like atoms in a lattice. Whereas atoms can freeze relatively easily, the kinetic energy of electrons almost always dominates because electrons have so little mass they need little energy to move. Moreover, the electron density is normally too high for individual electrons to be distinguished amid their quantum uncertainty in position. The result is a homogeneous smear of electronic charge. In 1934, however, the great theoretical physicist Eugene Wigner predicted that electrons could form a crystalline solid – if their kinetic energy and density were reduced enough.

Such structures have subsequently been observed in magnetic fields, where the kinetic energy is artificially suppressed. Demonstrations in zero field have relied on indirect measurements such as resistivity, however. ‘If you think about how to prove that a piece of a crystal really is a crystal, you shine a wave on the crystal and you observe Bragg diffraction,’ says Tomasz Smoleński of ETH Zurich in Switzerland.

In the first of the new papers, Smoleński and colleagues observed monolayers of molybdenum diselenide sandwiched between hexagonal boron nitride using a technique they helped develop called exciton umklapp spectroscopy.1 They bombarded the lattice with optically-excited, neutrally-charged dipolar particles. ‘This dipole interacts with electrons,’ explains Ataç Imamoğlu, who led the ETH Zurich research. ‘If the electrons are translationally invariant, they do not see a lattice; but if the electrons form a lattice, they scatter off that lattice.’ Using this technique, the researchers concluded that Wigner crystals formed at about 11K.

In the second paper, Hongkun Park and colleagues at Harvard University, US, report studies on bilayer molybdenum diselenide separated by hexagonal boron nitride.2 As part of an unrelated experiment, they produced apparatus enabling different electrostatic doping of the top and bottom layers. ‘We realised that there were surprising insulating states formed when we started to dope the top and bottom gates with electrons, particularly at specific density ratios like 1:1, 4:1 or 7:1,’ says Park. 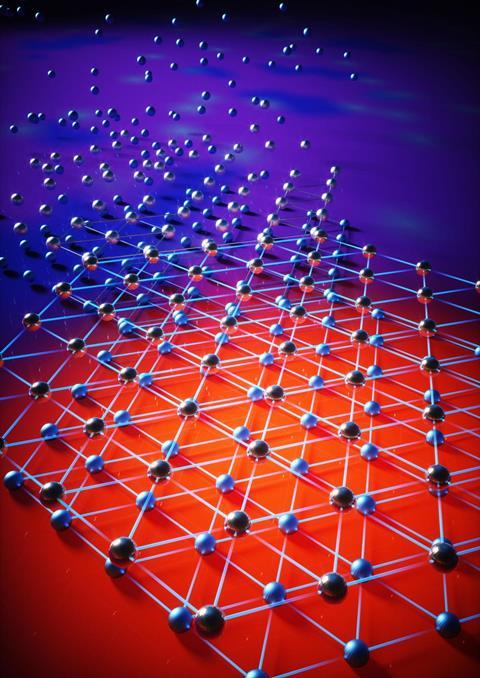 Source: © Ella Maru Studio in collaboration with Hongkun Park and You Zhou

A schematic of a quantum phase transition from an electron liquid to a bilayer Wigner crystal. Each ball represents a single electron

Theorists suggested these could signal bilayer Wigner crystals, and electron umklapp spectroscopy supported this. The crystals endured at temperatures of up to 40K and much higher electron densities than the monolayer Wigner crystals observed by the Swiss group. ‘There were some older theoretical papers that suggested bilayers could be useful in stabilising Wigner crystals, but what is surprising in the experiments by Hongkun is that they saw an enhancement that is much more dramatic,’ says theoretical physicist Eugene Demler of Harvard University and ETH Zurich, an author on both papers.

Both research groups now want to look at the phase transitions between normal matter and this exotic state in more detail. ‘There is a theorem showing that you can’t just go from this phase to the liquid phase in a single, first-order phase transition,’ says Imamoğlu. ‘There have to be other phases in between, and these are completely unexplored.’

Theoretical physicist Steven Kivelson at Stanford University, US, notes that ‘from a theoretical perspective there isn’t an absolutely sharp definition of what is a Wigner crystal and what is just an insulator… The question is how long of a correlation length do you need before you can call it a Wigner crystal. One of the problems with these and earlier experiments is that they do not have a good measure of what the correlation length is.’ He also sees important differences between electron umklapp spectroscopy and Bragg diffraction. ‘While, ideally, one would extract the correlation length from a diffraction experiment, since no one has a good idea of how to do this, the present authors rely on indirect measures that involve a degree of theoretical modelling to interpret,’ he says. ‘The results are not, on their own, obviously more or less convincing than previous measurements using more traditional techniques.’ Nevertheless, he concludes, ‘there is something really new here and it may well be opening up a whole new way of addressing electrons in highly correlated systems’.