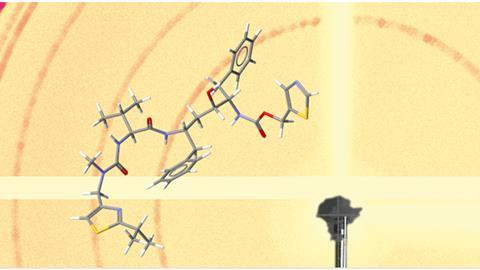 A new method allows researchers to solve crystal structures from polycrystalline samples with a mass of just 0.1mg. SDPD-SX combines routine equipment and well-known open-source software, and works significantly faster than traditional methods, generating data in 20–25 minutes rather than hours.

‘Collecting powder x-ray diffraction on a single crystal x-ray diffractometer has generally been possible for quite some time. What has not been possible, routinely, is then going on to solve a crystal structure,’ explains Elena Kabova from the University of Reading, UK. By treating a single crystal diffractometer as a powder diffractometer, users can easily get a powder diffraction pattern from a tiny amount of polycrystalline material. Now, Kabova and her colleagues have used the DASH software package in a global optimisation approach to obtaining crystal structures from this diffraction data.

‘SDPD-SX will have a great impact on the drug discovery process, opening the path to obtain useful structural information very early in the game,’ comments Peter Stephens, a crystallography expert and an emeritus professor at Stonybrook University in the US. ‘Using widely available resources, namely privately held instrumentation (not synchrotron facilities) and software, [the team] has created a practical means of determining crystal structures from sub-milligram powder samples.’

Whilst this project initially focussed on drug discovery, fields as disparate as geology, space exploration, forensics, painting authentication and food technology could benefit from the new method – as long as there is a crystalline component. And because the method is so fast, the team have since found that SDPD-SX could analyse air-sensitive samples that must be stored under nitrogen.

Pamela Whitfield, an expert in powder diffraction and leading scientist at Excelsus Structural Solutions, Switzerland, describes the method as a more modern and practical take on the old-school Gandolfi x-ray film camera. ‘Extremely small samples can be highly problematic and any easily accessible solution to collecting better data is a welcome addition to the analyst’s toolkit,’ she adds.

However, SDPD-SX is not without its problems – currently the data has to be collected at room temperature, so the resolution is not as sharp as if it were collected using a cryostream. The method also failed to solve the structure of γ-carbamazepine, due to the crystal’s large asymmetric unit and low space group symmetry.

Kabova and her colleagues envision SDPD-SX complementing existing techniques, rather than replacing them. ‘We have shown, certainly for small organic molecules, that this technique pretty much compares with what a standard powder diffractometer can do; maybe not with the same initial level of accuracy, but certainly of a quality suitable for subsequent refinement whether computational or based on the diffraction data,’ says Kabova.

Previously, the problem with crystal structure determination was that single crystal diffractometers required a single crystal. Without a useable single crystal, scientists used powder x-ray diffraction instead. But without the milligram quantities needed to run powder diffraction, obtaining crystal structure data seemed impossible. ‘When somebody tells you that it’s not possible; don’t believe them,’ comments team member Charles Blundell of C4X discovery in the UK. ‘Take it as a challenge that you need to think differently, and then invent something, because that’s how we make progress.’