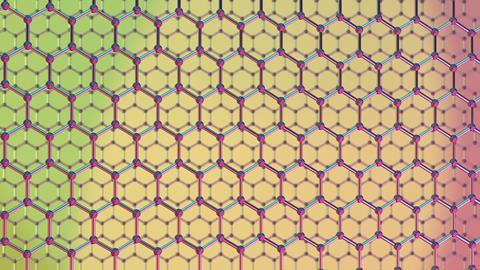 New twist on graphene gets materials scientists hot under the collar

After scientists have gone to such lengths to produce individual layers of atom-thick graphene it might seem odd that stacking them up again is one of the most exciting areas in the field right now. However, some of the most remarkable recent results in graphene research have come from joining two single layers of graphene together at a precisely controlled ‘magic’ angle. Exactly what’s going on is still something researchers are grappling with, but the ability to turn graphene, an exceptional conductor, into an insulator and then all the way to a superconductor has got materials scientists fired up.

It was the most wonderful thing that could possibly have been found, and certainly not something we would have dared to predict

Among graphene’s many extraordinary properties, perhaps its strangest is its ability to conduct electrons as though they were massless particles – with a constant velocity regardless of their energy. In monolayer graphene, this is about 106m/s – many times higher than in most semiconductors. This not only explains graphene’s extraordinary electrical mobility: it also ensures the electrons’ energy is mainly kinetic, with the interaction energy between electrons a minor correction. This is not necessarily true, however, at lower speeds.

In the early 2000s, several experimental and theoretical papers were published showing that in bilayer graphene with twist angles between the layers the electron velocity was much smaller, and got smaller still as the twist angle approached zero. In 2010, researchers at the Federico Santa Maria Technical University in Chile predicted that at an offset angle of around 1.5° the velocity would be reduced to zero.1 Independently, researchers at the University of Texas at Austin arrived at 1.1°.2 ‘When the velocity goes to zero electron–electron interactions become overwhelmingly important,’ explains condensed matter theorist Allan MacDonald of the University of Texas at Austin. ‘That means the system would be expected to be, in the jargon, strongly correlated – dominated by interactions that correlate the motions of different electrons.’ Strong correlations are seen in various exotic materials, but MacDonald and colleague Rafi Bistritzer refrained from making predictions. ‘I was convinced something interesting would happen, but not sure what it would be – we don’t really have reliable predictive tools when correlations are strong.’ 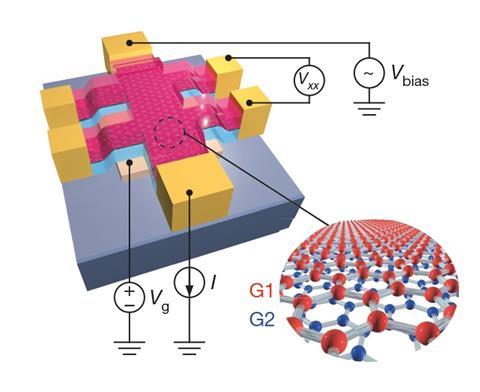 Several experimental groups attempted to realise MacDonald’s prediction. One of these was led by Pablo Jarillo-Herrero of the Massachusetts Institute of Technology (MIT). ‘Theorists in our community predict many things,’ he says. ‘Sometimes they turn out to be correct, sometimes they don’t.’ The group tested the idea by systematically cleaving flakes of graphene from graphite before picking up one flake using a polymer, rotating it by 1.1° – which became known as the ‘magic angle’ – and stacking it on top of another.

In 2018, the group unveiled their results in two papers.3,4 In one, they observed a correlated insulator state at temperatures below 4K when the bands normally responsible for conduction in graphene were exactly half-filled with electrons. When the two lattices are slightly rotated with respect to each other, it creates a periodic structure called a moiré superlattice as the hexagons move in and out of phase and to a corresponding periodic modulation of the band structure. The researchers attributed the insulating state to localisation of electrons at favourable sites within the moiré pattern.

By keeping the temperature below 1.7K and either feeding electrons into or out of the structure, the researchers found they could produce an electron- or hole-doped superconductor, respectively. ‘We were expecting maybe an insulating state due to correlations. We knew that superconductivity could happen but we didn’t really consider it, so that was a surprise,’ says Jarillo-Herrero. MacDonald was also delighted by the MIT experiments. ‘It was the most wonderful thing that could possibly have been found, and certainly not something we would have dared to predict,’ he says.

The voltage-induced transition between insulating and superconducting states raises an interesting possibility. ‘The system is a superconducting field effect transistor and there are many applications where one might like to have such a device, such as superconducting quantum computers,’ explains Jarillo-Herrero. ‘Even in classical computers, given how much energy is wasted through power dissipation, it might be advantageous to cool down all your electronics to make them superconducting.’ 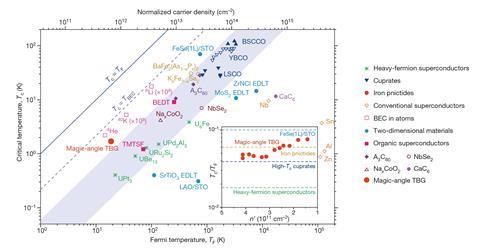 How the classes of superconductors, including magic angle twisted bilayer graphene (TBG), measure up

Many researchers also hope the material may help them to better understand conventional high temperature superconductors such as pnictides and cuprates. Except under extreme pressures, these materials have the highest critical temperatures of any superconductors, with the current record standing at 138K.5 However, although these superconductors have been known since 1986, scientists still have no clear theory about what leads to the superconductivity, making it very hard to optimise them. ‘A challenge of that field has been that if you want to change anything like doping or lattice constant, you have to synthesise an entirely new compound,’ explains Cory Dean of Columbia University. ‘You then get caught up with questions of what else you changed.’

Features of the superconducting state in twisted bilayer graphene – such as the apparent strong binding between electrons and the proximity to an insulating state – have led many scientists to conclude that the mechanism responsible for high temperature superconductivity in cuprates and pnictides is likely at work in twisted bilayer graphene too. Twisted bilayer graphene, however, can be doped simply by applying a voltage. Moreover, Dean and colleagues recently demonstrated that one can increase the interaction energy and thereby alter the magic angle using pressure to squeeze the graphene bilayers closer together. ‘We can go from superconducting to metal to insulating states over wide temperature and large field ranges without changing anything about the composition,’ he explains. ‘That makes understanding what we’re really modifying a much more tractable problem.’6

‘Something interesting’ has indeed been seen, and now research groups all over the world are getting involved in twisted bilayer graphene, often in creative combinations with itself or other 2D materials. ‘If we had room temperature superconductors that would be a big deal for humankind – for green energy in particular,’ says MacDonald. ‘So that’s the biggest hope.’ Quite where the field might go next is uncertain. ‘I’m in no hurry – right now, we’re enjoying the physics,’ says Jarillo-Herrero. ‘It often takes 30 or 40 years with dramatic new knowledge, but I’m sure at some point my engineering colleagues will try to take it over and see if they can develop applications – such is the natural way with evolving science and technology.’