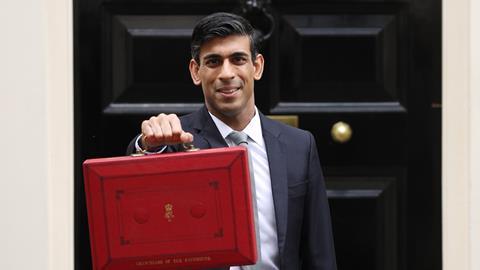 The UK chancellor of the exchequer, Rishi Sunak, has announced a boost to public funding for research and development, leaving many researchers cautiously pleased by the development.

The budget plans, announced on 11 March, mean public R&D expenditure will increase to £22 billion by 2024–25, more than doubling the country’s current public spending. This is despite the UK government previously stating that it would increase public R&D funding to a lower figure of £18 billion by this date.

‘It would be hard not to be positive and impressed by the scale of investment that’s been envisaged,’ says James Wilsdon, a research policy specialist at the University of Sheffield. He notes that if the UK government does indeed deliver on this, it would more than deliver from its side on the 2017 pledge to increase spending on R&D to 2.4% of its gross domestic product (GDP) by 2027.

But that goal also depends on whether the private sector also boosts its spending by £17 billion to a total £42 billion by 2027, which, Wilsdon notes, is a colossal task in any economy ‘let alone one that’s going through the biggest disruption in its trading relationships in modern times’.

The UK currently trails other developed economies on R&D spending. As of 2017, the UK spent 1.7% of its GDP on R&D, while other developed nations spent significantly more, including Germany and Denmark at 2.9% and Finland at 3.2%.

In a statement, Sarah Main, executive director of the Campaign for Science and Engineering, said the new R&D spending plans are ambitious and ‘a huge investment in a short period of time’. She noted that ‘this investment has the potential to accelerate the government’s efforts to tackle challenges such as net zero, flooding and new treatments for diseases, such as coronavirus, set out in the budget’.

Jeremy Kent Hall, a science policy researcher at the University of Sussex, tells Chemistry World: ‘My suspicion is what they are trying to do is increase targeted funding to areas they deem necessary for the economy.’

Wilsdon is unsure what remit the Arpa-like body will have in the current system. ‘We’re still largely in the darkness,’ he says, and remain unclear on details such as where the agency will be set up, whether it will be fully independent, if it will be part of the umbrella funding agency UK Research and Innovation, as well as what exact need it is going to fulfil.

‘What I believe may happen is that there is more money but fewer grants,’ Hall says, noting that this may disproportionately favour Russell Group universities. ‘That’s an issue that I think they need to consider – how this research is going to be able to fill the Brexit gap on one hand but also address the regional development policies that they are implementing.’