Researchers in Norway and Sweden have rated the symmetry in a variety of three-centre four-electron bonds and used the data to develop a numerical index that predicts if other instances of this important bonding motif will be symmetric.

Chemical bonding remains fertile ground for unexplained behaviours and unanswered questions. One strand concerns bonds spread over three atomic centres that hold four electrons, known as three-centre four-electron bonds. Historically, studies have focussed on hydrogen bonds of this type (known as short, strong hydrogen bonds). But given their importance in stabilising transition states and in catalytic mechanisms, other types of three-centre four-electron bond are now rising up research agendas. 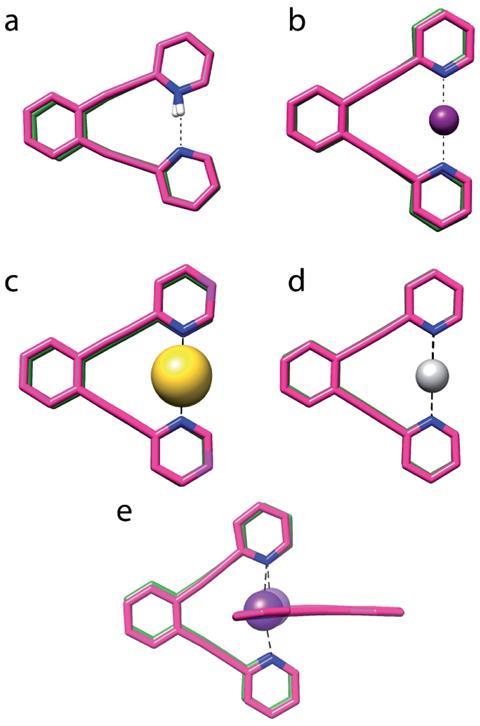 The team analysed the position of the central atom in three-center, four-electron bond complexes with a variety of cations (a) H, (b) I, (c) Au, (d) Ag and (e) Na

‘What we did was to look from hydrogen up to the transition metals to try to find some similarities, or general rules. When is this bond really formed? When is it symmetric, or asymmetric, and how does that influence the energy of the interaction?’ says Máté Erdélyi from Uppsala University, who led the work. By using a bis(pyridine) model system in which two nitrogen atoms act as the two Lewis bases (electron pair donors) of the bond, Erdélyi and colleagues were able to study how the three-centre four-electron bonds varied with different central cations.

The group found that most complexes prefer a static, symmetric three-centre four-electron bond, with the exception of H+ and F+. Interestingly, the complexes with these cations favoured a dynamic interconversion between two tautomers in the case of the proton, and a static asymmetric geometry stabilised by what was essentially found to be a single covalent bond for F+. They also explored the covalent and electrostatic character of the bonds – neither alkali metals (Na+/Li+) formed bonds involving significant charge transfer, showing relatively weak electrostatic interactions instead.

To rationalise these properties, the researchers investigated the factors at play. They found that the ratio of the electron affinity of the central cation to the size of the cation surface was the most effective numerical index to predict whether a bond would be symmetric or asymmetric. ‘We very openly looked into different factors and tried to correlate,’ explains Erdélyi. The index can ‘predict if a cation will form a true three-centre bond or not, and whether it will be symmetric or not – being able to predict it is actually quite important.’

The study ‘has important implications for our understanding of non-covalent interactions,’ comments Anthony Legon, emeritus professor of physical chemistry at the University of Bristol, UK. ‘For example, it provides a means, via their criterion of electron affinity per unit surface area of the electrophile, to judge whether two very strong, symmetrical halogen bonds (in the case where both Lewis bases are the same) will result or whether one will be weak and the other strong. This can be extended to examples in which the two Lewis bases are not the same and to include other types of non-covalent interaction such as tetrel and chalcogen bonds.’

‘This is a very nice, high impact piece of work that through central electrophilic atom variation elucidates and importantly furthers the current understanding of fundamental factors governing the contribution of covalent and electrostatic character of three-centre bonding,’ comments halogen bonding expert Paul Beer from the University of Oxford, UK.

Team member Ann Christin Reiersølmoen Holta tells Chemistry World the concept for the study came about by accident. ‘The plan was to do gold catalysis, but the chemicals didn’t arrive … We had hoped to synthesise a gold (iii) complex, which turned out to be a proton complex instead. So we thought – why not use this for something positive and look more into the symmetry?’ Erdélyi adds that it was the lithium complex that really intrigued him. ‘The true serendipity is that we found that we get a symmetric lithium and an asymmetric proton. That’s really interesting because they have the same size… By then we had gone deep enough into the project that we couldn’t let it go.’

The team has since moved on to examining bonds with different Lewis bases where other lone-pair effects may come into play.2