First examples of odd-electron σ bonds for aluminium and gallium

Researchers have reported two copper complexes supported by aluminium or gallium metalloligands, featuring two-centre/one-electron σ bonds.1 The unusual complexes were synthesised by reducing the preceding cationic copper(i)⇢metal(iii) species and are the first examples of odd-electron σ bonds for the heavier group 13 elements.

This handful of examples has just been expanded by a team of researchers in the US and Germany, which has synthesised two complexes involving one-electron bonds with aluminium and gallium. To make the compounds, they first synthesised cationic copper–aluminium and copper–gallium complexes, then reduced them with KC8 to form 17-electron neutral radical {Cu–M}11 complexes. 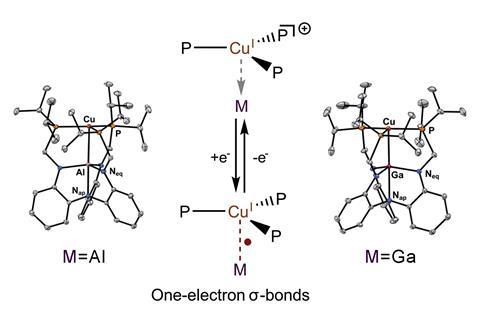 The unusual structure and bonding of the neutral radical complexes were investigated using x-ray crystallography, EPR spectroscopy and theoretical calculations. The heavier group 13 elements are less electronegative so result in increased covalent interactions over examples with boron. The team observed short copper–aluminium and copper–gallium bond lengths, and behaviour consistent with the highly covalent nature of singly occupied molecular orbitals that involve both metal centres and ligand donor atoms.