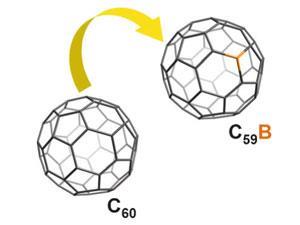 A team of scientists has developed a simple way to synthesise heterofullerenes – fullerenes with atoms other than carbon in their structure – by exposing fullerenes to boron vapour during their growth. They found that atom exchange with a carbon takes place to form a derivative known as borafullerene. The team believes the process can be easily scaled up and applied to other all-carbon analogues including nanotubes or graphene.

While doping has long been known to tailor the electronic properties of fullerene, boron has been largely ignored as a dopant since a direct synthesis route from fullerene didn’t exist.

Led by Harry Kroto at Florida State University, US, the team came up with the idea for atom-exchange in the gas-phase following previous research on fullerene growth mechanisms by carbon incorporation. ‘We observed facile atom exchange processes when exposing fullerenes to carbon vapour,’ explains team member Paul Dunk. ‘That realisation led us to attempt the exposure of fullerenes to boron vapour.’

Borafullerenes were synthesised by vapourising fullerene-containing boron rods with a laser pulse to form a supersonic cluster. Thanks to a state-of-the-art Fourier transform ion cyclotron resonance (FT-ICR) mass spectrometer at Florida's high magnetic field laboratory, they were able to detect a stable, borafullerene species in high abundance in the cluster. What’s more, they found that atom exchange was efficient even when using low cost, commercial grade boron.

Dunk believes that not only is this an easy, economical way to access heterofullerenes but the process could have universal appeal. ‘The same formation process should be applicable to metallofullerenes, fullerenes with metals trapped inside of the cage, to produce endohedral heterofullerenes, which should also possess exciting and useful properties,’ he says. These could be used, for example, in fullerene-based molecular electronics, solar cells and maybe even hydrogen storage technologies.

Alan Balch at the University of California, Davis, US, agrees. ‘This is an exciting accomplishment,’ he says. ‘One immediately wonders how many other heterofullerenes can be made through this sort of gas-phase substitution.’ But, he adds that there is one big question. Can borafullerenes be isolated in a condensed phase? ‘Converting molecules seen in the gas phase into solids or liquids that most chemists can manipulate and use is a major challenge. Most chemistry students are aware of fullerenes, which are now available in tonne quantities as a black solid, but few are aware of the equally interesting Met-Cars, clusters of metal atoms and carbon, which have only been detected in the gas phase.’