Dynamics of an ethanol Leidenfrost droplet in an electric field. The total time covered by (b) and (c) is about 9 seconds

Researchers from the Netherlands and China have discovered that they can make small droplets dribble on a hot surface like a bouncing ball by applying an electric field. Changes in the droplet’s mass and charge over time make it bounce progressively higher, seemingly defying gravitational attraction.

Inspired by a video showing droplets orbiting a charged knitting needle at the International Space Station, Sander Wildeman from the University of Twente and Chao Sun from Tsinghua University wanted to investigate how charged droplets behave in a strong electric field. ‘Gravity is a problem on Earth, and we wanted the droplets to move without friction as they do in space,’ explains Wildeman. This is why they decided to do their investigation on Leidenfrost droplets, which move with very little friction.

The Leidenfrost effect can be observed when adding water droplets to a very hot surface. Instead of evaporating immediately as might be expected, the droplets skitter around the surface almost frictionless as they hover on a thin film of their own vapour – something you often see when dropping water on a hot pan.

Wildeman and Sun set up a steel ball connected to a DC power supply 7mm above a superheated aluminium plate. Depositing a water, ethanol or perfluorohexane droplet onto the plate, the team was surprised when they saw the droplets bounce progressively higher. 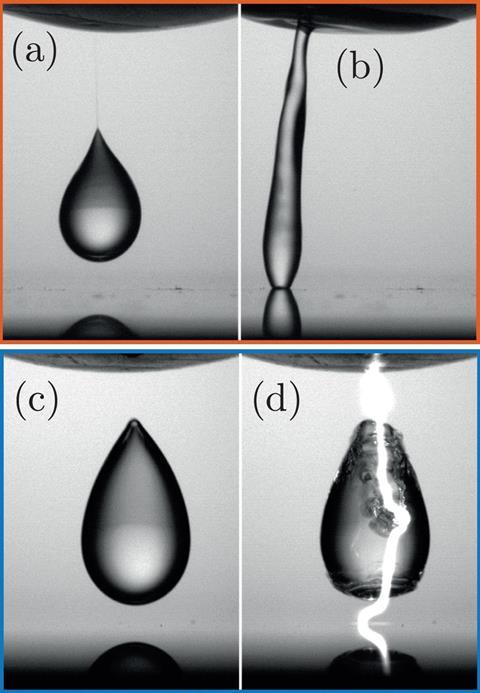 ‘We did the experiment as something to try, we didn’t expect anything to come out of it,’ says Wildeman. Now the challenge was to understand the phenomenon. The team realised that the combined effects of gravity and electric field were acting on the mass and charge of the droplet. The droplet’s charge decreases stepwise as its mass slowly decreases from evaporation. Because the droplet’s mass decreases faster than its charge, its bouncing amplitude becomes higher with time. Every so often, the droplet gets boosted, which makes it jump even higher. Yet it is still an open question as to why this boost happens.

‘In spite of its discovery more than two centuries ago, the Leidenfrost effect is still surprising us,’ says Franck Celestini at the Université Nice Sophia Antipolis in France. ‘In this nice study Wildeman and Sun demonstrate the ability to use an electric field in order to actuate droplets in the vertical dimension.’

Possible applications of this peculiar effect lie in microfluidics, potentially helping to steer droplets containing biological cargo to desired channels. ‘We saw an interesting phenomenon happening and if we understand it, we can do something with it. Research is often done the other way around,’ concludes Wildeman.