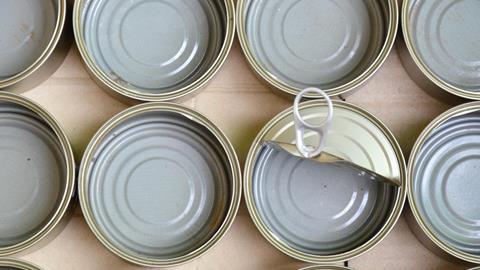 The compound bisphenol A (BPA) is one of four new substances to be identified as a ‘substance of very high concern’ (SVHC) by the European Chemicals Agency (Echa).

The controversial chemical, which is used to make plastics and epoxy resins, often used to package food, was added to Echa’s ‘candidate list’ of SVHCs following a proposal from French authorities, and is described on the list as ‘toxic for reproduction’. The other three substances added to the list, which now contains 173 chemicals, were nonadecafluorodecanoic acid, p-(1,1-dimethylpropyl)phenol and 4-heptylphenol – all used in the production of plastics.

Inclusion on the list will not have immediate implications – EU suppliers of BPA or products that contain more than 0.1% BPA by weight will now have to supply their customers with a safety data sheet, but can otherwise operate normally within existing regulations. However, it is the first step towards much greater restrictions on the chemical, as substances on the candidate list are periodically considered for inclusion on the ‘authorisation list’ by the European commission.

Echa spokesperson Mikko Väänänen tells Chemistry World that it is expected that substances added to the candidate list will at some point also be added to the authorisation list. ‘If the substance is ultimately added to the authorisation list then it cannot be placed on the market or used after a given date, unless an authorisation is granted for the specific use,’ he says. ‘[This] procedure aims to assure that the risks from substances of very high concern are properly controlled and that these substances are progressively replaced by suitable safer alternatives while ensuring the good functioning of the EU internal market.’ Manufacturers or downstream users can, however, apply for authorisation, he adds.

Matt Davies from the British Plastics Federation says Echa’s decision could ‘pave the way for future restriction’ of the substance, which may have potential implications for the plastics industry. ‘The lack of effective alternatives is a cause for concern should the substance be restricted, as it could potentially affect the quality of certain packaging,’ he says. He also points out that the European Food Safety Authority’s position remains that there is ‘no consumer health risk from bisphenol A exposure at current exposure levels’.

Others, such as environmental group ChemSec, welcomed the development. ‘BPA is a heavily debated chemical and ChemSec welcomes it’s inclusion on the candidate list,’ said the organisation’s policy adviser Frida Hök in a statement. ‘Many companies have worked hard for years in order to substitute BPA and we hope that by now identifying it as an SVHC, even more alternatives will be available in the marketplace.’