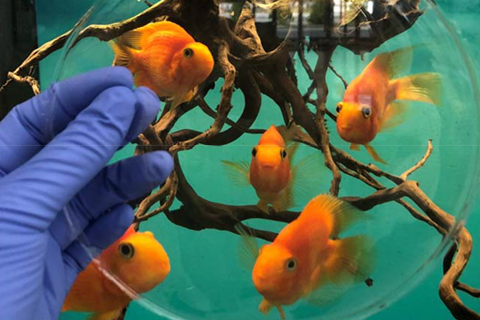 Polycarbonate is a popular shatter-resistant alternative to glass in windows, display screens, bottles and optical fibres. However, polycarbonate plastics are frequently made using bisphenol A (BPA) and glass fibres. BPA is an endocrine disruptor increasingly associated with regulations – Canada, the EU and the US Food and Drug Administration have banned BPA in baby bottles with the EU also banning BPA in food packaging – as well as health risks. And in the event of a fire, glass fibres generate fine particulates that can cause respiratory problems. Scientists are therefore searching for safe alternative components that improve the transparency, and mechanical and thermal properties of polycarbonates like BPA and glass fibres do.

Here, a team led by Sung Hwang, Dongyeop Oh and Jeyoung Park from the Korea Research Institute of Chemical Technology has made a new, tough, transparent polycarbonate composite replacing both BPA and glass fibres with two biomass-derived alternatives – isosorbide and cellulose nanocrystals.

Isosorbide already features in pharmaceuticals and cosmetics, and has a high thermal stability. It is composed of two tetrahydrofuran rings and can be made from glucose. The team first dispersed the cellulose in isosorbide and used an in situ polymerisation to produce their composite. Cellulose disperses evenly throughout the material and only 0.3wt% is needed. The final material is stronger than BPA-based controls, with a tensile strength of 93MPa. The new composite was also highly transparent – transmitting 93% of light at 500nm. ‘The excellently dispersed cellulose nanocrystals minimally interfere with visible light and the synergetic interaction between the polymer and the filler reduces the microbubbles in the matrix, which can induce light scattering,’ comments Park. Park and his colleagues attribute the synergistic interactions and high miscibility between the isosorbide and cellulose moieties to ‘the principle of like-dissolves-like’ as they are both derived from glucose and have ether linkages.

The team says their plastic could be used in optical fibres, for safer glazing plastics and even in baby bottles.

Stephen Miller, an expert in sustainable plastics from the University of Florida, US, says ‘the majority of bio-based polymers are interesting primarily because they are bio-based; it is the exception that they possess properties that surpass those of fossil fuel-based materials. That one polymer nanocomposite can accomplish all this is quite noteworthy.’