Buy one get one free for energy storage

Researchers combine electricity storage and hydrogen production, enabling energy to be stored both short- and long-term 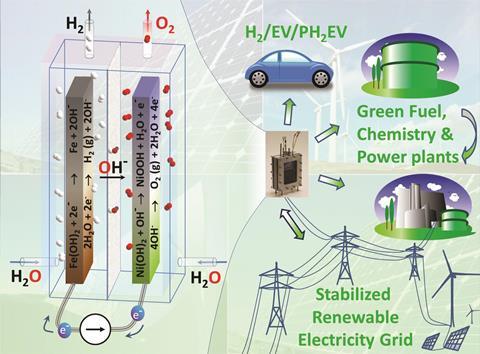 Scientists from the Netherlands have integrated a battery with an electrolyser to store energy from renewable sources and convert any excess into hydrogen fuel. The device stores or supplies electricity as a nickel-iron battery and, when full, the alkaline electrolyser automatically splits water into hydrogen and oxygen.

Batteries can help match demand for electricity to intermittent supply from renewable wind or solar sources by storing excess energy in chemical form for when it is needed later.

Nickel-iron batteries are robust and made from abundant raw materials. Their drawback, known as gassing, has limited their application. Progressive battery charging reduces the negative Fe(OH)2 electrode to iron while the positive Ni(OH)2 electrode produces nanostructured NiOOH. Iron and NiOOH are good catalysts for subsequent hydrogen and oxygen evolution from water and the gas production wastes energy and electrolyte.

Fokko Mulder and his team from Delft University of Technology took advantage of the natural gassing reaction. They fitted a state-of-the-art ceramic polymer composite membrane between nickel-iron battery electrodes to separate oxygen and hydrogen, and employed an alkaline potassium hydroxide electrolyte to conduct OH– ions. Now they could collect the hydrogen produced for future use as a fuel.

Over 18 months, they simulated renewable electricity supply and demand subjecting the ‘battolyser’ to overcharges, rapid charge–discharge switching, and partial discharging. ‘Surprisingly, the dual function does not degrade the materials or compromise either of the functionalities,’ says Mulder. The team found that the battery electrodes and the gas evolution catalysts form and reform over many charge and discharge cycles.

The battolyser’s overall efficiency of 80–90% compares well with lithium ion batteries, which are considered the most efficient at 90–94%, although the efficiency of the subsequent transformation of hydrogen fuel into energy is not taken into account. Mulder highlights other advantages of combining a battery and electrolyser: ‘One gets two functionalities in one simpler system for less than the price of two separate systems.’ Moreover, the battolyser would be in use for longer, in more situations of oversupply or demand, than either battery or electrolyser alone.

Michael Marshak at the University of Colorado Boulder in the US has worked on water-splitting and battery devices over number of years. He says the work ‘exemplifies the need for multiple approaches to energy storage. The use of both traditional battery storage and water electrolysis could accommodate both short and long term energy demand.’ Andreas Borgschulte, another expert in energy technologies at the Swiss Federal Laboratories for Materials Science & Technology says ‘the use of abundant materials without noble metals are additional advantages.’ However, he notes that the limited energy density currently restricts its use in stationary applications.