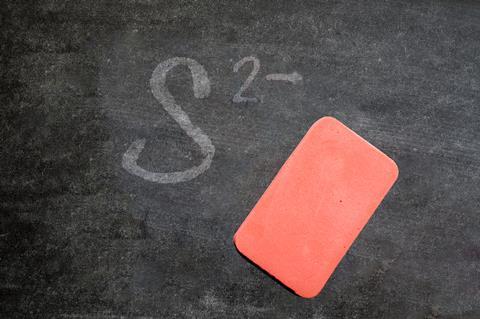 For decades, scientists have used sulfide ions (S2-) in their calculations with little debate. Now, however, scientists in Australia argue that S2- should be stricken from the literature, potentially invalidating some older work.1

A project investigating the use of sulfide solutions to reduce mercury emissions from alumina refineries sparked Peter May, of Murdoch University, and his team’s interest in S2-. They found that calculations using existing equilibrium constants produced annual mercury emission predictions that varied from milligrams up to kilograms. In an attempt to unravel these disparities, they propose that assuming that S2- is present in solution might be inaccurate.

‘It turns out that this uncertainty in the literature occurs because the sulfide ion is artificial,’ explains May. ‘Every attempted measurement of it fails, resulting in values that are chaotic.’

However, it is difficult to prove the non-existence of a species. May likens their hypothesis to fairies at the end of the garden. Whilst there cannot be evidence that fairies do not exist, there is no evidence to support their presence.

In previous investigations, a major issue was that spectroscopic equipment lacked accuracy. Therefore, scientists wrote off uncertainties by saying that S2- was present, but in unquantifiable quantities. However, newer spectroscopic techniques can find and quantify species that may once have been undetectable.

May’s team used Raman spectroscopy to investigate the reactions of NaHS with NaOH and CsOH. This was the same approach as Meyer’s investigation into these reactions in 1983,2 where the researchers doubted the certainty of the values they obtained, but their concerns were largely ignored. Looking at these reactions again with more accurate equipment, however, May’s team were able to say that they found no meaningful proof of S2-.

‘This study points to an important problem in science; the persistence of wrong facts that survive untouched over the years in scientific literature due to all kinds of mechanisms … mostly, laziness and bad citation practises,’ says Montserrat Filella, who studies the chemical processes in environmental and biological chemistry at the University of Geneva, Switzerland. ‘Challenging the existence of S2- is not new; for instance, the Meyer’s study has been known for many years without noticeable effects on books, thermodynamic models, etc. We really need to adopt better ways of building up knowledge. Reading the supporting information of this [May’s] article is an excellent starting point.’

‘The sorry caravan of confusion over values will roll on until S2- is comprehensively banished by the chemical community,’ says May. He calls for chemists to stop tolerating S2- and challenges those who disagree to provide experimental evidence that sulfide exists.