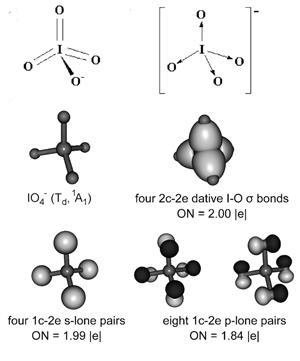 I-O bonds within the periodate ion are usually represented as double bonds (left), but AdNDP suggests they are dative (right)

Hypervalent iodine reagents are widely used in organic synthesis, but their structures haven’t been studied in detail. In the majority of textbooks and papers, they are drawn with double bonds between iodine and oxygen, nitrogen or carbon.

But a new study has used theoretical models to show that this might be incorrect. Instead, it suggests the bonds within some of these compounds are dative, with iodine donating the electron pair.

A team led by Alexander Boldyrev and Viktor Zhdankin at Utah State University in the US examined the nature of the bonds within compounds such as iodosylbenzene (PhIO) and the periodate ion (IO4-) using a bond modelling technique called adaptive natural density partitioning (AdNDP). Their calculations revealed the bonds to be dative rather than double.

The group says the discovery will be useful when it comes to understanding reaction mechanisms, and suggests the textbooks may need correcting.