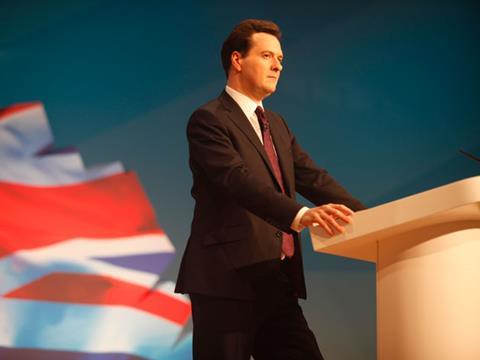 The chancellor, George Osborne, said that both applied and curiosity driven research are important to the UK

The chancellor of the exchequer, George Osborne, has outlined eight technology areas in which he wants the UK to lead the world. In his first speech on science and technology issues at the Royal Society in London, the chancellor focused his discussion on future technologies, including regenerative medicine, synthetic biology, energy storage and advanced materials. At the same time, Research Councils UK (RCUK) has published a new plan for capital investment Investing for growth: capital infrastructure for the 21st century.

In his speech, Osborne singled out regenerative medicine as the area the healthcare research should focus on. The UK research councils and the Technology Strategy Board are already making big investments in this area, including £25 million for translation science and £50 million in the Cell Therapy Catapult Centre to address the challenges associated with getting promising scientific discoveries into the clinic.

Synthetic biology was also highlighted by the chancellor as an area that the country has depth and expertise in. He said that £20 million has already been invested in synthetic biology in UK institutions via the Biotechnology and Biological Sciences Research Council.

Graphene was named as one of the advanced materials UK industry needs to exploit. The chancellor also announced £22 million to be allocated by an Engineering and Physical Sciences Research Council (EPSRC) funding round – half of the funding will come from the EPSRC’s budget and half from the government’s recent £50 million graphene investment.

In the power sector, the lack of test-bed demonstrator capacity and dedicated R&D facilities to develop new grid-scale energy storage technologies was noted as a serious gap that needed addressing.

The other technology areas that the chancellor said that the country needed to focus on were agri-science, big data, robotics and space.

Research for its own sake?

In his speech, Osborne also made an effort to acknowledge that intellectual inquiry is worthwhile in of itself. ‘It’s my job to focus on the economic benefits of scientific excellence. But, I understand that scientific enquiry can’t be reduced to simple utilitarian calculation – even though improving the human condition is a pretty good justification for any human endeavour.’

Mark Walport, director of the Wellcome Trust, said that he was encouraged to hear the chancellor talk so enthusiastically about the importance of science. ‘It is particularly gratifying that he acknowledges the parallel importance of curiosity-led and applied research, and the need for continued investment in science even in times of fiscal restraint.’

Derek Woollins, head of the school of chemistry at the University of St Andrews and director of EaStCHEM, is reassured that more money is being directed at UK science. However, he is not convinced that directing research so aggressively will get the best out of UK science. ‘It is not clear how these eight areas map on to the current expertise or likely future industry in the UK. We are already playing catch up in some areas,’ he says.

CaSE director Imran Khan was also glad the Chancellor is taking a personal interest in science and hopes this progress is reflected in future spending decision. ‘The forthcoming auction of the 4G spectrum auction will be a good test – that £4 billion-ish revenues are a return on past investment in science and technology, and should be reinvested,’ said Khan.

RCUK’s new capital investment framework lays out its plan and priorities for the UK’s capital infrastructure set against a backdrop of declining funding. In the Comprehensive Spending Review 2010, the capital investment budget for large equipment and infrastructure was drastically slashed by £1.4 billion from the projected figure of £3.3 billion during the 2011-2015 spending review period. This cut has affected national science facilities, as well as making it increasingly difficult for universities to secure funding for new equipment and facilities. Any item of equipment requested on RCUK grants that costs more than £10,000 requires the host institution to pay for half and any item over £135,668 is also subjected to additional criteria and assessment.

Other investment priorities for RCUK include an additional physical sciences beamline and electron microscopy facility at the Diamond Light Source and incremental upgrades at the ISIS muon source. The plan also acknowledges that ‘the instrumentation infrastructure demanded by research-led chemistry and associated disciplines requires continuous reinvestment’. This is being implemented through a national upgrade programme funded through the EPSRC.

Robert Parker, chief executive of the Royal Society of Chemistry said that ‘funding of up to £15 million to enhance the capability for chemistry research in the UK, through grants to build capacity in core experimental techniques such as nuclear magnetic resonance and mass spectrometry, is very welcome.’