A chemical mixture that pulses purple and pink for several hours could be a step towards lifelike systems that can respond to their surroundings. Thomas Hermans from the University of Strasbourg, France, and his team use a molecular ‘fuel’ to drive a colour-changing perylene diimide (PDI) derivative into steadily diminishing oscillations. ‘When you find the right balance between the system wanting to assemble and adding a fuel that breaks up the assembly, then you can find this window where oscillations occur,’ Hermans explains.

Hermans was inspired by microtubule protein structures that rapidly form and disperse in our cells to give them shape and help transport other materials. The speed of assembly is related to the fact that the proteins bind strongly, which also makes microtubules very sturdy. ‘They’re stronger than steel, but a microtubule in your cell grows in 30 seconds over micrometre lengths,’ Hermans says. The new oscillating reactions are a step towards similar capabilities because they also change state rapidly.

The Strasbourg team found that the PDI derivative polymerised in water in 2016. ‘There’s a nucleation phase that is relatively slow and then after that it elongates and grows very quickly,’ Hermans explains. That exponential, non-linear growth rate is ‘the first ingredient you need to find an oscillator’, Hermans says. ‘My intuition kicked in that you need to screen a parameter space where oscillations can occur.’

That parameter space emerges from atmospheric oxygen oxidising the PDI into an uncharged form. ‘In the uncharged state the molecule is pink and it really wants to self-assemble,’ Hermans explains. It stacks into nanofibres, which in turn organise into micrometre-sized colloids. By contrast sodium dithionate, Na2S2O4, reduces the PDI into a purple dianion that disassembles.

A model of strength

The chemists set about optimising the PDI’s concentration, and also the rate at which the dithionate ‘fuel’ flows in and drives disassembly. ‘It only took us two weeks to find the first oscillations,’ Hermans says. The colour pulses that emerge are always most obviously visible to begin with, but after around 10 hours they could only be detected by a camera. Hermans and his colleagues are currently unsure why, beyond a mathematical explanation that he finds unsatisfying.

Beyond investigating the decaying pulse intensity, the researchers are seeking to produce long, persistent fibres of high-strength materials similar to microtubules. But intriguingly, a system that changes state so rapidly is a step towards a lifelike system, Hermans adds. Such a reactive material might try to retract itself from a flame, for example, rather than just burning like an inanimate material might. 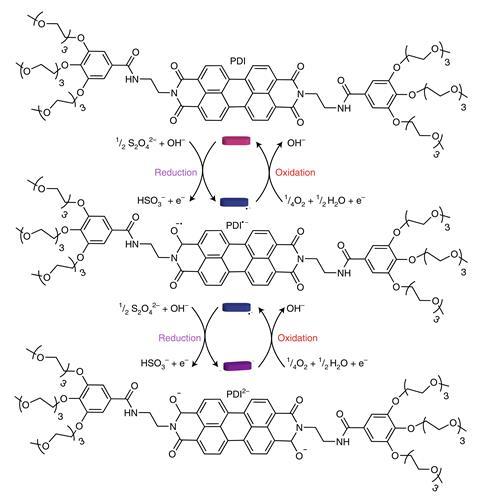 PDI is reduced to PDI2– upon the addition of the molecular ‘fuel’. Spontaneous oxidation in air leads first to a radical anion PDI•– and then to the neutral PDI, changing colour between pink and purple as it goes

Sergey Semonov from Weizmann Institute of Science in Rehovot, Israel, says that these results begin to merge ‘supramolecular self-assembly with oscillations and patterns emerging from non-linear chemical kinetics’. Microtubules’ strength is in its dynamic responsiveness, he adds, and Hermans’ team has now ‘made the first steps in designing synthetic polymeric structures’ that behave similarly. Yet Semonov adds that a lot of work is still required ‘to get a level of control comparable to biological systems’, including a predictive numerical model to enable effective design.

Annette Taylor from the University of Sheffield agrees that there ‘is still much to be understood regarding the mechanisms operating here’. ‘The novelty of the work lies in the fact that the assembly processes themselves are the driving force for the oscillations,’ she says. The study therefore provides valuable information about self-assembly, which may be important in many different systems, Taylor thinks, including biological ones. ‘Harnessing an internal mechanism which controls fibre length or macromolecular assembly size could be an attractive application of this work further down the line,’ she adds.