Prodding molecule causes it to flip between isomers

The atoms in a single organic molecule have been rearranged by European researchers using mechanical forces. The researchers say the findings open a window into the internal electronic dynamics of molecules, and could aid the development and understanding of molecular switches and motors. 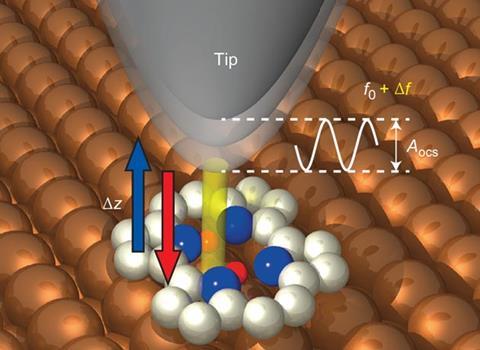 While an ordinary AFM tip could flip the molecule from one tautomer to the other, a probe tipped with xenon couldn’t. The researchers believe this is because the switching isn’t purely a result of mechanical forces

In recent years, several research groups have sought control of individual dye molecules called porphyrins adsorbed on metallic surfaces. These molecules, structured around four central nitrogen atoms, can exist in multiple isomers called tautomers that differ according to the relative positions of two hydrogen atoms on these four nitrogen atoms. The activation energy barrier to switching between tautomers can be surmounted by applying a voltage with a scanning tunnelling microscope, allowing electrons to tunnel between tip and surface.

Philip Moriarty of the University of Nottingham, UK, who was not involved in this new work, says this switching is difficult to control, however. ‘Those electrons are injected: they’ll tunnel through; they’ll go into the substrate; they can diffuse away; they can cause extraneous reaction that you mightn’t want,’ he explains.

Takashi Kumagai at the Fritz Haber Institute of the Max Planck Society in Berlin and colleagues got around this stumbling block by using non-contact atomic force microscopy (AFM) instead. AFM has recently been attracting interest among chemists for examining exactly what is happening at the molecular level during, for instance, surface catalysis or studying how reactions proceed. 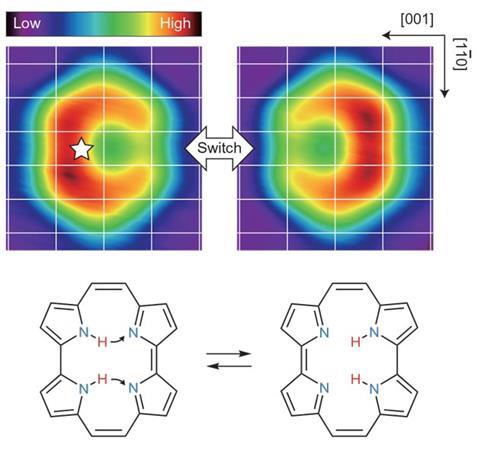 They measured how the oscillation frequency of an atomically-fine tip covered with copper atoms changed as they brought it gradually closer to various points on the surface of a porphyrin derivative called porphycene. When the tip approached the bond between two nitrogen atoms with hydrogen atoms attached, the frequency first decreased to a minimum – signifying attraction between the tip and molecule – before increasing as the force became repulsive. As the tip got closer still, however, the frequency suddenly dropped again as it became more strongly attracted than ever before.

Density functional theory calculations indicated the double bond that forms between deprotonated nitrogen atoms is more strongly attractive to the metal tip than the single bond between protonated nitrogen atoms. Therefore, the repulsive force between the tip and the molecule had provided the energy needed to push the protons onto the other side of the molecule – effectively pressing a molecular switch. The force needed was less than 1nN.

This was not the whole story, however. When the researchers repeated the experiment with a chemically inert xenon-tipped probe, the hydrogen didn’t ‘jump’ to the other side of the molecule – implying that this tip could not press the switch. ‘The reaction is not activated by a pure mechanical force that we imagine in the macroscopic world,’ explains Kumagai. ‘It is induced by chemical interaction between the tip apex, atom and molecule: the force can be defined as a gradient of the potential between them.’

Moriarty describes the work as ‘a pretty strong leap forward that certainly justifies a lot of excitement’.