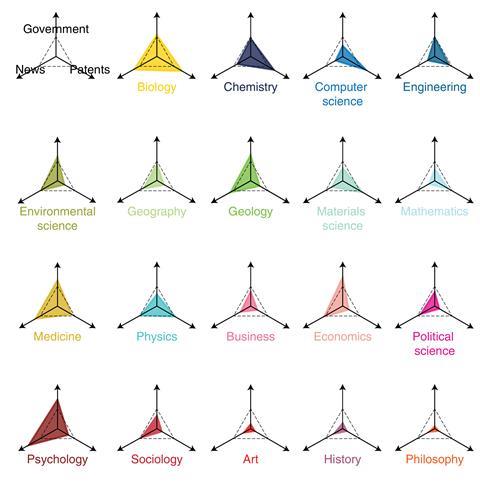 Biology, medicine and psychology studies are overrepresented in news media reports, but chemistry and computer science research is heavily used in patents. The dashed triangles represent a baseline where each study has the same chance to be used

More chemistry than physics research finds its way into patents, but is less often covered in the news than biology or medicine. These results come from a study that has demonstrated a strong correlation between publicly funded research and research appearing in patents, government documents and media outlets.

The link between upstream public research funding and downstream public use is a much-debated topic. However, the lack of systematic data has made it difficult to investigate.

Now, researchers at Northwestern University, US, and the Microsoft Research Lab have analysed millions of documents from across all scientific fields to examine the correlation. The team focused on three areas of public interaction: publicly available documents from the US government, coverage by mainstream media outlets, and patents granted by the US Patent and Trademark Office.

The analysis found a surprisingly high correlation between the three aspects of public interaction and work that had received public funding. But there was an enormous diversity in how different scientific fields were linked to the public domains studied. Chemistry papers were most likely to be used in patents and government documents, while being less correlated to public news coverage. In contrast, social science fields such as psychology and economics saw substantial representation in the media and government reports, but very little involvement with patents. More even coverage was seen in biology and medicine, which showed roughly equal involvement in all three categories.

The study also revealed that public domains drew from the most highly cited papers in their field, indicating that public interest aligns with what scientists themselves consider important.