Pioneer of the study of enzyme stereochemistry passes away at 96 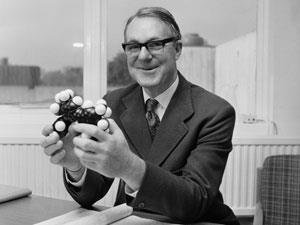 Sir John Cornforth, joint winner of the 1975 Nobel prize in chemistry, has died aged 96. He is best known for his work on the stereochemistry of enzyme-catalysed reactions, including the biosynthesis of cholesterol. He is the only Australian to have won the chemistry Nobel.

Cornforth was born in Sydney, Australia in 1917. From childhood, Cornforth suffered from otosclerosis, a disorder that left him completely deaf by the age of 20. While studying chemistry at the University of Sydney, he was unable to hear lectures, learning instead from textbooks, papers and practical laboratory work.

After graduating, Cornforth was awarded a scholarship to study for a PhD in steroid synthesis at Oxford University in the UK, along with fellow student Rita Harradence who would later become his wife, interpreter and research partner. The pair arrived in the UK in 1939 and was involved in purifying the drug penicillin during the second world war. Later, they moved to the National Institute for Medical Research (NIMR) in London, where Cornforth started the work that he was awarded a Nobel prize for in 1975, and a knighthood in 1977.

At that time Cornforth was working with George Popják and together they devised a strategy to break down the 19 ring structure of cholesterol carbon-by-carbon. They then used radioactive tracers to identify how acetic acid building blocks were assembled to create cholesterol. This work gave Cornforth the tools necessary to study the stereochemistry of numerous enzyme reactions, such as the synthesis of steroids from mevalonic acid via squalene, and, ultimately, led to him sharing the chemistry Nobel prize with Vladimir Prelog. After winning the Nobel prize, Cornforth became a professor at the University of Sussex where he stayed until his retirement. He is survived by three children.