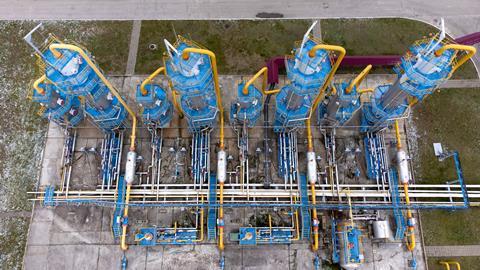 The war in Ukraine has sparked a scramble among European countries to reduce their reliance on Russian fuel imports. But as leaders in the EU and UK try to rethink their territories’ energy landscapes, concerns are growing that the plans won’t do enough to protect the environment.

In early March, the European commission outlined its ‘RePowerEU’ plans to cut Russian gas imports by two thirds by the end of the year and become completely independent of Russian fossil fuels ‘well before’ 2030. The UK is much less reliant on Russian gas, but is still affected by price rises that have followed the Ukraine conflict. The government has drawn up its own ‘British energy security strategy’, a roadmap intended to increase the country’s energy independence, and has committed to phasing out Russian oil and coal by the end of 2022 and Russian gas imports ‘as soon as possible thereafter’.

These plans aim to cut off funding for the Kremlin’s war effort and limit Vladimir Putin’s ability to disrupt the continent’s energy supplies. But some experts fear that decisions made in haste in the short-term could lock the EU and the UK into long-term reliance on environmentally damaging energy sources. UN secretary-general António Guterres said it was ‘madness’ that the Ukraine conflict could see countries become ‘so consumed by the immediate fossil fuel supply gap that they neglect or knee-cap policies to cut fossil fuel use’.

In 2021, 155 billion m3 of Russian gas was piped into the EU, accounting for around 40% of the bloc’s total gas supply. In its RePowerEU proposals, the European commission wants to accelerate a clean energy transition by reducing the bloc’s energy requirements and using new energy sources to replace Russian gas. This involves installing more solar panels and heat pumps, as well as speeding up wind-power projects and grid infrastructure improvements. The proposals also include energy savings from improving the energy efficiency of residential and commercial buildings. 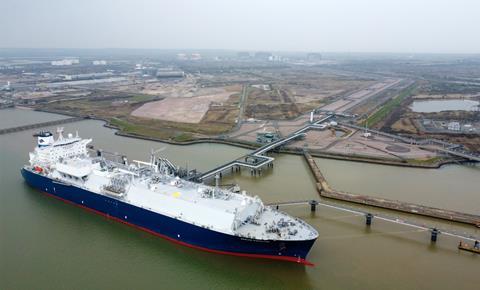 A tanker delivers liquefied natural gas (LNG) to a terminal in Rochester, UK. The RePowerEU proposal includes plans to build new LNG infrastructure across the EU.

A major component of the plan, however, is also to diversify gas supplies – replacing Russian gas with gas sourced from elsewhere. The EC wants to double the amount of biomethane produced from agricultural waste, and to import significant quantities of fossil gas from non-Russian partners.

This includes importing more shale gas from the US, with an agreement signed at the end of March for an additional 15 billion m3 this year. The deal also commits the EU to buy an additional 50 billion m3 of US gas each year until 2030. The EC says it will work with member states to accelerate the approval of new liquefied natural gas (LNG) import infrastructure including ‘onshore facilities and related pipelines’. Germany has also recently announced plans to build two new LNG ports – the country is particularly reliant on gas imports owing to its huge chemical sector as well as its decision to move away from nuclear power following Japan’s Fukushima disaster in 2011.

But diversifying gas supplies can’t be a long-term solution says Bram Claeys, from energy policy thinktank the Regulatory Assistance Project, because ‘it just perpetuates our vulnerability to price shocks and geopolitical risks. And, of course, it would also endanger the climate policies and the need to reduce greenhouse gas emissions.’

Claeys is the co-author of a report put together by researchers from four energy-focused NGOs, which argues that the EU can fully reduce its reliance on Russian gas by 2025, without the need for new gas infrastructure. The report proposes that two thirds of Russian gas imports could be offset by energy efficiency and electrification measures, and greater deployment of wind and solar assets. The remaining energy requirements could be delivered by filling unused capacity in the existing infrastructure with non-Russian gas imports. 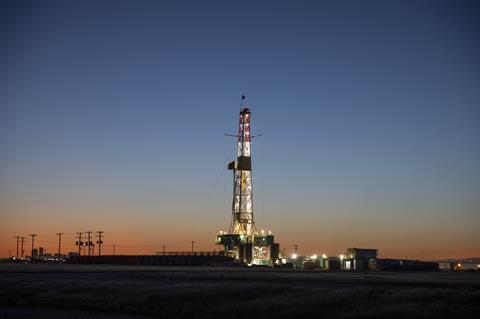 The EU plans to plug the gap in its gas supply with non-Russian imports, such as US shale gas. It has signed a deal to import 50 billion m3 of US gas every year until 2030.

‘We can actually significantly accelerate our [reduction of] Russian gas imports, faster than the European plans are now projecting,’ says Claeys. ‘And without needing to build new fossil fuel and gas import infrastructure such as new LNG terminals or new gas pipelines.’

‘And while climate impacts of shipping [US] LNG compared to Russian gas might be beneficial, the impact of fracking on the US environment is of course, very, very concerning – both from a climate and just health and environmental point of view,’ he adds. ‘So this is not the bridge that we want to be on – it might be a short-term lifeline, but definitely not a transition fuel that we want to keep on using.’

Fabian Hein, an energy analyst at the Agora Energiewende thinktank says that the narrative that natural gas can help bridge Europe’s clean energy transition is ‘collapsing’. In its own report on ‘regaining Europe’s energy sovereignty’, Agora has highlighted 15 actions that it says will help the EU meet its climate commitments while also reducing gas consumption.

Given the unprecedented current political situation, Hein notes that the debate around Europe’s energy future ‘is quite intense and not especially structured’. He urges policymakers not to overlook environmental concerns when taking decisions on Europe’s future energy landscape. ‘It is crucial to take both immediate and structural measures to achieve energy sovereignty,’ he says. ‘Climate protection and energy security go hand in hand – the solution is a concerted crisis effort to scale up renewables and improve energy efficiency in buildings and industry.’

Another consequence of the EU’s drive to secure huge new quantities of gas is that it becomes harder for poorer nations to meet their own emissions targets, notes Caroline Kuzemko, an expert on the politics of energy transitions and climate change based at the University of Warwick, UK. ‘What it’s done is tightened the global gas market,’ she explains. ‘If you’re telling other parts of the world to get off coal now – gas is an option for them. But if they can’t get their hands on gas and gas is so incredibly expensive, well [they’ll prefer] coal.’

The British energy security strategy also commits to increasing clean energy projects, with investments in offshore wind, hydrogen and solar power. But its proposals to construct new nuclear reactors, increase North Sea oil and gas extraction and undertake a fresh review on fracking – which has been banned since 2019 – have been criticised. And in contrast to the RePowerEU plan, the UK government’s proposals offer no new provisions for lowering energy demand, for example by insulating buildings. 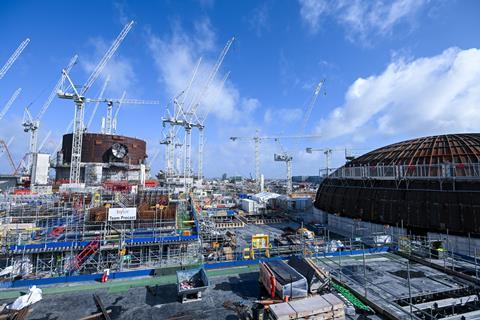 The nuclear power station Hinkley Point C is currently under contruction in the UK, but the project is overbudget and has suffered numerous delays.

‘To try and – as the government seems to be doing – solve the problem by just thinking about supply is ludicrous in my view,’ says Kuzemko. She adds that while the plan offers some potential upsides in terms of decarbonisation and energy security, it ‘doesn’t do anything for affordability’.

In a statement published online, several energy experts from the University of Sussex described the focus on supply rather than reducing energy demand as ‘a huge missed opportunity to deliver immediate assistance to families suffering under the cost-of-living crisis’.

Notably, given the current high price of energy, the government’s plan includes no real push for more onshore wind, despite this offering the cheapest electricity. But there is a significant commitment to nuclear power with plans to build eight new nuclear reactors. Nuclear facilities are expensive, long-term projects and critics have pointed to the difficulties surrounding the Hinkley Point C reactor – currently nine years behind schedule and billions of pounds overbudget – to illustrate concerns around reliance on atomic power.

‘The nuclear thing to me is concerning in terms of affordability. It just is an extraordinarily expensive form of electricity,’ says Kuzemko. She points out that while the cost of electricity from nuclear plants is estimated to be roughly double that of onshore wind, these calculations don’t fully account for the costs of decommissioning. Current figures put the cost of decommissioning the UK’s existing nuclear power infrastructure at more than £130 billion over the next 120 years, although Kuzemko notes that these estimates continue to rise. ‘It’s even more expensive than we already think it is,’ she says. ‘Why would you link the UK consumer long term to that burden of electricity costs? I just don’t understand it.’

The UK government’s proposals on fracking and North Sea oil and gas extraction have also raised alarm bells, coming just three days after the Intergovernmental Panel on Climate Change (IPCC) released its ‘now or never’ report on limiting global warming to 1.5°C. Scientists estimate that to meet the 1.5°C goal, nearly 60% of the world’s current oil and gas reserves must remain in the ground, meaning that new projects are difficult to justify.

‘The British energy security strategy’s focus is on fixing energy supply and committing the UK to expensive and polluting long-term options like nuclear and more fossil fuel exploration,’ said University of Sussex energy policy researcher Mari Martiskainen. ‘The IPCC reported that now is the last time to act to avoid catastrophic climate crisis. Pushing for more North Sea fossil fuel exploration would lock us into fossil fuels, which are getting more and more expensive, for years to come.’

‘The point is that the 1.5°C is a global thing – it’s not a UK thing. And the UK absolutely should be reaching its targets because it’s a historic emitter. And it’s a rich country,’ says Kuzemko. ‘And if it can’t face up to really important questions like how to get rid of embedded fossil fuels like gas – if they can’t face up to that with the institutions that they have and the resources that they have, then how on earth can you be telling somewhere else in the world to do so?’