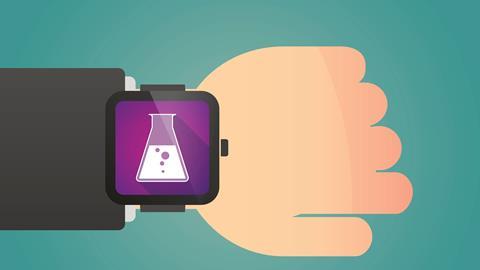 Hungarian and Japanese scientists have chemically pre-coded a timer into a self-assembling system.

A pH clock reaction coupled with lactone hydrolysis can control and drive the self assembly of pH-responsive building blocks.

Scientists are interested in self-assembly not just because it is the basis of life but also because it is a promising manufacturing strategy for a range of functional materials. After making good progress dictating what structures they make, researchers are now working on the when.

Now, István Lagzi, from the Budapest University of Technology and Economics, and his co-workers have devised a reversible self-assembly system with time controls. It couples a pH clock reaction – an autocatalytic reaction – with lactone hydrolysis. The system starts off at a low pH then the methylene glycol–sulfate pH clock reaction provides a fast pH jump, which drops slowly as the lactone is hydrolysed. pH-responsive building blocks assemble only during the transient alkaline state. ‘The time scale of the whole process can be chemically pre-coded into the system by varying the initial concentration of the reagents,’ explains Lagzi. The time between the beginning of the reaction and the fast pH change, and the lifetime of the transient pH state, can vary from around 10 to 200s.

Annette Taylor, an expert in chemical engineering at the University of Sheffield, UK, notes that ‘the method will work under conditions when it is not possible to use light or other external trigger mechanisms.’ Taylor goes on to suggest that the approach has attractive features for widespread applications in engineering and medicine, providing suitable chemical components can be found.