After a 40-year wait, new information on how water clusters around protons stands to benefit our understanding of acids. 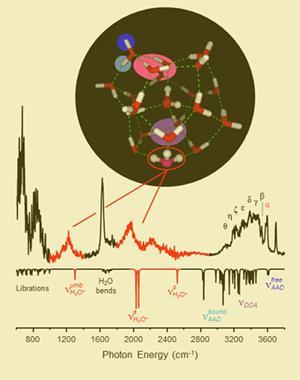 The answer to a Nobel Prize winner’s challenge a decade after it was made could benefit our understanding of anything involving acids, from biological signalling to fuel cells.

In 2004, Nobel Prize in Chemistry winner John Fenn issued a challenge to Mark Johnson from Yale University in New Haven, Connecticut. 30 years previously, amid intense interest in how water accommodates protons in aqueous acids, Fenn made a curious discovery.1 Exploring water cluster growth around protons in the gas phase, he’d found that clusters with 21 water molecules and one proton were unusually stable. Yet neither Fenn nor anyone else had conclusively proven the structure of such ‘magic number’ clusters since.

The problem, Johnson recalls, was that infrared spectroscopy methods then available couldn’t access the part of the spectrum where absorptions linked to the proton could happen. ‘Fenn challenged us to go after it with new IR methods,’ he tells Chemistry World. Now, ten years later and four years after Fenn’s death, the Yale team says it has found the long-sought answer.2 ‘We have finally traced the vibrational transitions that tell us how the excess charge is accommodated,’ says Johnson.

Beyond solving this particular puzzle, their findings will help improve modelling of weak aqueous acids, relevant across many different fields. ‘This new experimental data provides a much-needed benchmark to guide theoretical calculations of water structure in the presence of electric charge,’ Johnson says.

Johnson says his team spent a couple of years building the instrument that enabled them to make these measurements. ‘Modern cryogenic radiofrequency ion traps give us a better way to cool ions into well-defined shapes that have clearer structural signatures in the infrared,’ he explains. ‘That, coupled with better IR lasers that access the critical 1500-2500 cm-1 region, combined to reveal the key absorptions due to the excess proton.’

The Yale chemists could then compare the spectrum their set-up produced against the structure suggested by existing evidence. Scientists already agreed that the proton in the 21-water cluster is incorporated into a H3O+ hydronium ion that sits on top of a cage of water molecules. The hydronium ion is held in place by hydrogen bonding between its hydrogen atoms and the oxygen atoms on three surrounding water molecules.

Josep Anglada and Miquel Torrent-Sucarrat from the Institute of Advanced Chemistry of Catalonia in Barcelona, Spain, had previously independently calculated what this structure’s infrared spectrum might look like.3 One key prediction was that anharmonic coupling between different vibrational modes would reduce the O-H stretch in the hydronium ion by up to 500 cm-1.

Until now no-one had been able to record spectra at wavenumbers low enough to test that, but Johnson’s team’s spectrum showed exactly this behaviour. ‘These results open a wide window for the identification of the hydrated proton and contribute to a better comprehension of its behaviour, which is a fundamental issue in chemistry and biology,’ Anglada comments.

Ohio State University’s Anne McCoy, who’s previously worked with Johnson on vibrational spectroscopy but was not involved in this work, agrees the findings are ‘very important’. ‘Proton transport in aqueous solution occurs by transfer through the H-bonding network via H3O+,’ she explains. ‘Being able to use spectroscopy on clusters, particularly a large one like protonated water 21, provides a way to make connections between discretely assignable features in the spectra of these smaller species and the spectrum of acidic solutions. Using this, a better understanding of the mechanisms for proton transport in water can be obtained experimentally.’

Johnson now hopes to gather more evidence on this fundamental issue. ‘We want to see how the signature of the embedded hydronium changes with cluster size and temperature. How large does the assembly need to be to mimic the real article?’