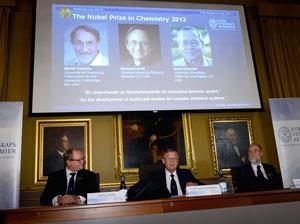 The 2013 Nobel prize in chemistry has been awarded to Martin Karplus of Harvard University, US, Michael Levitt of Stanford University, US, and Arieh Warshel of the University of Southern California, US, for ‘the development of multi-scale models for complex chemical systems’. Their work in the 1970s led to the development of fundamental computational tools that are used today to model complex chemical reactions, such as the split-second molecular changes occurring during photosynthesis, or within enzymes and receptors in the body.

‘Chemistry is an experimental science, but theoretical chemists are providing answers to questions [such as] how to design drugs to fit with their target molecules,’ said Sven Lidin, from Lund University, Sweden, who sat on the committee that decided this year’s chemistry Nobel winners. ‘This year’s laureates have provided the secret handshake that brings theoretical and experimental chemists together.’

One of the trio’s landmark contributions to the field was finding a way to combine quantum physics with classical physics to model the interactions between different atoms and molecules. They first achieved this with relatively simple molecules such as the planar 1,6-diphenyl-1,3,5-hexatriene but were later able to apply the same modelling techniques to much more complex targets such as the bacteria-killing enzyme lysozyme.

The quantum theoretical calculations needed to simulate chemical reactions require a huge amount of computational power. Calculating how atoms and molecules interact using classical physics is comparatively simple by contrast and can be used to model much larger molecules, but cannot be used to calculate the behaviour of atoms during reactions. Chemists once had to base their models on one or the other, but Karplus, Levitt and Warshel developed computer models that could apply quantum and classical calculations to different parts of a single molecule.

‘They showed you could actually tackle these scary, big molecules like enzymes with a hybrid approach: combining quantum mechanics for the reaction, with a classical molecular mechanics treatment of the rest of the protein,’ explains Adrian Mulholland, a computational chemist at the University of Bristol, UK, who was a postdoc under Karplus. ‘They really have made a huge contribution to how we study different systems.’

Speaking by telephone at the announcement, Warshel said he is continuing to use combined quantum molecular mechanics to study ‘ever more complex’ biochemical reactions. He added he is looking forward to the Nobel prize ceremony in December.

‘This year’s prize is thoroughly deserved,’ says Dominic Tildesley, president-elect of the Royal Society of Chemistry, who also researches computational modelling. ‘The ideas developed by Karplus, Levitt and Warshel have contributed enormously to the field and have been combined with breakthroughs in computational technology over the years to give us a new way of doing science.’

Last year’s chemistry Nobel prize was won by Robert Lefkowitz of Duke University and Brian Kobilka of Stanford University for their work on G-protein couple receptors.