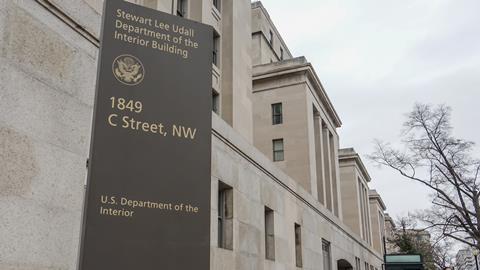 Concern over vetting of US science grants by political appointee

National Academies speak out after news of Interior Department’s policy on grants worth more than $50,000 emerges

A new grant review policy at the US Department of the Interior (DOI) gives a single political appointee the authority to screen research grants worth more than $50,000 (£36,000) to ensure that they ‘align’ with the administration’s priorities. The move has prompted criticism and a warning from the leaders of the US National Academies.

McNutt, along with the NAE’s president Clayton Mote and NAM’s president Victor Dzau, underscored that government research investments should be based on independent advice and assessment from unbiased experts without political interference. However, they did acknowledge that federal agencies are entitled to align funding programmes with their mission priorities.

National Academies spokeswoman Jennifer Walsh tells Chemistry World that the statement was ‘most immediately prompted’ by the recent news of the DOI directive, but she says it ‘follows similar concerns being raised at other agencies in recent months.’ Walsh adds that the statement was not motivated by that fact that DOI halted two National Academies studies last year. The department instructed the organisation in August to cease all work on its study of the potential health risks for people living near surface coal mine sites in Central Appalachia. At the time, the National Academies defended this project ‘an important study’, and said it stood ready to resume the work as soon as possible.

More recently, in December, the DOI ordered the National Academies to halt another study, which was reviewing the agency’s offshore oil and gas operations inspection programme to enhance safety.

In its new policy memo, the DOI specifies that Steven Howke – a senior adviser to the department’s assistant secretary of policy, management and budget – will review these ‘discretionary grants and cooperative agreements’. It is unclear whether Howke has any scientific background.

‘Discretionary grants would include any research grants from non-profits or universities,’ says Jacob Carter, a research scientist with the Union of Concerned Scientists. He notes that the DOI funds a lot of environment and climate research, and suggests the new policy will have implications for these lines of research, as well as the physical sciences like chemistry. ‘This does affect all scientists,’ Carter states.

The DOI began reviewing its grants and cooperative partnerships in April, and the agency says the new guidance continues its ‘responsible stewardship of tax dollars’.