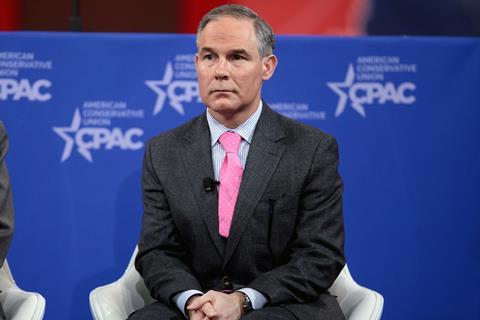 The head of the US Environmental Protection Agency (EPA) has banned scientists whose work is being funded by the agency from serving on its science advisory boards. The move has been criticised by the scientific community, as well as by politicians, and accusations have been made that these committees have been stacked with industry insiders.

The new directive, which applies to just three of the EPA’s 22 advisory committees – the Science Advisory Board (SAB), Clean Air Scientific Advisory Committee (CASAC) and Board of Scientific Counselors (BoSC), came on 31 October – two weeks after agency administrator Scott Pruitt previewed the policy.

‘Whatever science comes out of EPA, shouldn’t be political science,’ Pruitt stated in his 31 October announcement. According to the EPA, members of the SAB, CASAC and BOSC received upwards of $77 million (£58 million) in direct EPA grant funding in the last three years while serving on these committees.

Pruitt has also appointed new leadership and new members to all three advisory panels. Lead toxicologist at the Texas Commission on Environmental Quality, Michael Honeycutt, has been made chairman of the SAB, which provides scientific advice and peer review to the agency on broad scientific matters. Honeycutt has repeatedly pushed to loosen limits on the release of substances such as ozone, arsenic, mercury and benzene.

In addition, Tony Cox, the president of a Colorado-based consultancy, is the new chair of the CASAC. Cox’s consultancy has over the years received funding from the American Chemistry Council, the American Petroleum Institute and other industry sources, and has published research describing the EPA’s methods for calculating optimal air quality standards for ozone as ‘unreliable, logically unsound and inappropriate for drawing causal inferences’.

Finally, Paul Gilman, a senior vice president at waste management firm Covanta, will now chair the BOSC. He replaces Deborah Swackhamer, an air pollution expert with the University of Minnesota who has expressed concern for months about the turmoil her committee has faced under the Trump administration. She plans to continue to serve as a regular member of the BOSC, at least until her term ends in March 2018.

‘I continue to be concerned with the new appointments, especially the SAB and CASAC, where we see a significant increase in industry affiliated people,’ Swackhamer tells Chemistry World. ‘It is unprecedented to have people as chairs of these two committees that are not active researchers in the academic sector, as they tend to have the most objective perspectives and present less conflict of interest.’

Pruitt’s policy change represents ‘scientific censorship of the committees that are supposed to provide independent advice’ to the EPA, Swackhamer says. However, she acknowledges that Gilman served as assistant administrator of the EPA’s Office of Research and Development and this experience will be valuable to BOSC.

The top Democrats on the House of Representatives science, space and technology committee joined their counterparts on the energy and commerce committee and sent a letter to Pruitt on describing his new directive as being ‘less about independent science and more about stacking these boards with representatives from regulated industries’.

Adding more industry-friendly voices to these advisory boards while simultaneously attempting to remove independent scientists would diminish the quality and integrity of the EPA’s science, the lawmakers warned. They pointed out that these committees already have representation from various key stakeholder industries, including the chemicals, oil and gas sectors, and urged Pruitt to withdraw his new policy. The deadline for Pruitt’s response to these congressional concerns is 17 November.