Cryo-electron microscopy (cryo-EM) can reveal small organic molecule structures with an unprecedented combination of speed and certainty, US scientists have shown. The team, based at University of California, Los Angeles (UCLA) and California Institute of Technology (Caltech) in Pasadena, obtained molecular structures of 12 different compounds, each taking minutes. All were powders or amorphous solids unsuitable for existing x-ray crystallography techniques. The researchers also determined structures from a four-powder mixture and crushed ibuprofen tablets.

Previously, there was no tool for ‘rapid unambiguous structure determination for organic chemists’, says Hosea Nelson from UCLA. The new approach is a ‘game-changer’ because it can be unambiguous, he adds.

The team’s methods are based on a technique developed by Tamir Gonen at Howard Hughes Medical Institute in 2013. Unlike Nobel prize-winning cryo-EM imaging, the microED approach uses the cryo-EM instrument in diffraction mode, with extremely low electron doses to produce diffraction data as the sample continuously rotates. This limits damage to the compounds being analysed that x-rays or higher electron doses would cause, and captures atomic resolution structures. 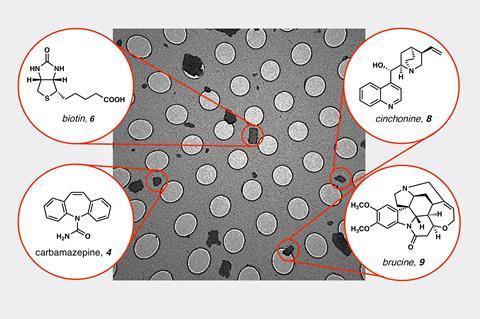 MicroED involves crushing powders between glass slides and depositing them on a copper grid with 1μm diameter holes, cooling them to liquid nitrogen temperatures and placing them in a cryo-EM instrument

Gonen primarily studies proteins, but when he visited UCLA in 2015 prior to moving his lab there, friends introduced him to Nelson. ‘I mentioned we determined several structures and could frequently see hydrogens and [Nelson’s] mind started going crazy and he thought, “Well, could you put small molecules in there?”,’ Gonen says.

Together with Brian Stoltz’s Caltech group and UCLA’s Jose Rodriguez, Gonen and Nelson’s teams started the project almost two years ago. The first year involved Mike Martynowycz, a postdoctoral researcher in Gonen’s lab, training Chris Jones, a brand-new PhD student in Nelson’s group without prior crystallography experience, to do microED.

‘Once Chris was trained then things started to happen very fast,’ says Gonen. ‘If you have a good person like we do then it really is minutes for them to collect data.’ Nelson says that it took the team just a week to design the experiments and collect all the data in the new paper. Trained crystallographers should pick up the microED technique quickly, he adds.

Putting raw data into software converts it into initial structures, confirming each substance’s identity less than 30 minutes after putting the powder into the microscope. Nelson calls this data ‘dramatically informative’, much more so than that from nuclear magnetic resonance, the workhorse organic chemistry structural analysis technique. Fully refined structures suitable for publication require further processing that takes longer, analogous to x-ray crystallography.

Gonen emphasises that the technique can get atomic resolution from nanocrystals weighing just a femtogram, a quadrillionth of a gram. ‘The crystals that you need for x-ray are about a billion times bigger in size,’ he explains. Nelson highlights the workflow benefits, saying that his team doesn’t have time to grow crystals and send them off to expensive crystallography facilities. While the Thermo Fisher Talos Arctica electron microscope they use costs around $2 million (£1.54 million) to buy, and around $100 an hour to run, that’s cheap by comparison, he says. And the technique could now be used on any modern cryo-EM tool, with around 20 groups around the world already doing microED.

Stefan Raunser, a cryo-EM expert at the Max Planck Institute of Molecular Physiology, Dortmund, Germany calls the study ‘outstanding’. He notes that some of his co-workers attended a workshop on microED that Gonen ran and ‘were impressed by the power of the technique and its ease of use’.

Caltech’s Stoltz adds that the response to the team’s ChemRxiv preprint paper from the research community has been ‘truly overwhelming and exciting’. ‘So many new ideas are flying around, it will be exhilarating to see where this will lead,’ he says.