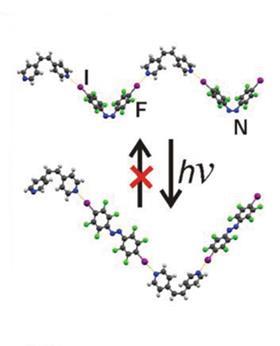 Azobenzenes are an important family of molecules where cis–trans isomerisation causes considerable changes in molecular shape. Oleksandr Bushuyev and colleagues at McGill University used a supramolecular interaction, known as halogen bonding, to combine photo-mechanically active azobenzene units with a variety of countermolecules, to create cocrystals with a range of photo-mechanical characteristics.

The photo-mechanical cis–trans isomerisation in one of the multi-component azobenzene cocrystals took place in a crystal-to-crystal fashion, giving the scientists a rare opportunity to use x-ray diffraction to study a crystal as it undergoes cis–trans isomerisation. Previous work on similar reactions has involved liquid crystals, polymers and gels – environments that are unconducive for direct structural analysis.

Whereas it has long been a mystery if and how crystalline solids could accommodate sterically demanding cis–trans isomerisations, the direct insight revealed that the transformation is topotactic – it proceeds with a memory of the initial crystal structure – and is mediated by an amorphous phase. The researchers say this is an exciting observation as it indicates that the halogen-bonding interactions that are found in the initial and resultant crystals are most likely conserved in the non-crystalline intermediate.