Scientists from Japan report that their revolutionary crystallographic technique has determined the stereochemistries of molecules with axial and planar chiralities, where classical methods had failed.

A team led by Makoto Fujita from the University of Tokyo captured the chemistry community’s attention just a few years ago when they reported a crystallographic technique capable of analysing compounds without first needing to crystallise them.

X-ray crystallography is uniquely placed to determine molecular structure, providing users with an electron density map and hence an image of their compound. Until recently, however, it required the often arduous growth of high quality single crystals of the compound of interest. With Fujita’s crystalline sponge method at hand, this needn’t be the case. A crystalline host metal–organic framework (MOF) absorbs target molecules within its pores and orders the guests within the framework lattice, allowing for their analysis using x-ray diffraction. This expands the breadth of compounds that can be analysed with the technique and, most impressively, it can even provide the crystal structures of liquids. 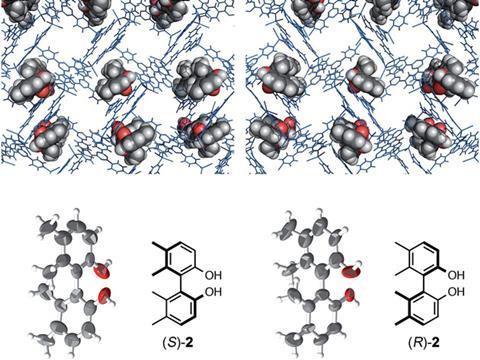 Now, Fujita and coworkers report that their crystallographic sponge technique delivers a much needed method to reliably determine the stereochemistries of a range of chiral compounds. Indeed, compounds with axial and planar chiralities find practical applications in catalytic asymmetric syntheses, however, determining the absolute structures of such compounds is known to be challenging. Significantly, by determining the molecule’s crystal structure, their method has for the first time identified the stereochemistry of a compound whose absolute structure had remained unknown. Whilst the team had previously hinted at their method’s potential towards this, they now report on this unprecedented success, whilst also showing off the new-found scope of their technique.

The team separated racemic mixtures of their chiral targets with high-performance liquid chromatography. Subsequent soaking of their crystalline sponges in the enantiomerically pure samples, in quantities as low as micrograms, encourages guest absorption and framework distortion. ‘One of the most fascinating aspects of this report is the ability of an achiral crystalline sponge to undergo a single crystal to single crystal transition upon binding a chiral guest,’ comments Jon Clardy, a chemical biologist at Harvard University, US, who was not involved in the work.

Unfortunately, a number of research groups have had less success in reproducing the method — following on from Fujita’s 2013 Nature report,2,3 it became apparent that although based on a simple principle, putting the technique into practice was no mean feat. ‘When we published our Nature paper two years ago, we were uncertain about the scope and limitations of the technique,’ explains Fujita. ‘We have since discovered that good quality data can only be obtained when the guests are present in very high concentrations. For each molecule of interest, careful optimisation of the soaking conditions is required to achieve this, and much like tuning reaction conditions in synthetic organic chemistry, no universal set of conditions exists.’ Fujita is confident that the technique will become common practice as others gain experience in optimising the conditions necessary to gain high guest occupancies for various targets. He adds that it usually takes newcomers in his group a matter of months to become skilled in the technique.

‘Demonstrating the applications of the crystalline sponge method inspires one to dream of further avenues to explore,’ says Timothy Ramadhar, a postdoctoral fellow in Clardy’s group at Harvard. He believes that the next crucial step will be in the design of new sponges, increasing the scope and generality of the method. ‘A call-to-arms for MOF researchers should be made where the viability of pre-existing or newly developed MOFs for the method are tested. We have personally dabbled into MOF design and aim to report on our efforts shortly.’