What discoveries caused the biggest buzz in chemistry labs around the world in 2010? With the help of an expert panel of journal editors, Chemistry World reviews the ground breaking research and important trends in the year’s chemical science papers.

Many discoveries came from outer space in 2010. This included the work by Jan Cami of the University of Western Ontario, Canada, and colleagues, who used an infrared spectrograph to identify buckminsterfullerene (C60) and C70 in the planetary nebula Tc 1 (Chemistry World  (CW) September, p21).1 This discovery helps back up theories about diffuse interstellar bands (DIBs), absorption lines in astronomical spectra. Investigating these DIBs is one reason why Harry Kroto and colleagues performed the experiments that made C60 in the first place. 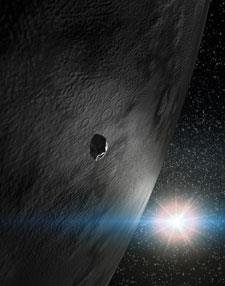 In another part of the universe, an international team of researchers found water vapour close to a carbon-rich giant star, something previously thought impossible (CW October, p26)2. Investigating the circumstellar envelope around star IRC +10216 - the deep sooty outflow of dust and gas around the aging and expanding star - the researchers discovered dozens of spectroscopic lines, corresponding to water vapour at different temperatures and hence locations within the envelope. Scientists will now have to rethink their understanding of the chemistry that takes place as carbon-rich stars grow older and expand.

Earlier in the year, two teams of US astronomers found water ice on the surface of asteroid 24 Themis (CW June, p21).3 The teams independently concluded that the asteroid held water ice, again using infrared spectroscopy, and by combining their results the teams showed that a thin frost layer covers the whole surface of the asteroid. Because such a thin layer should sublime into space quite quickly, the scientists propose that the asteroid must contain a subsurface ice reservoir that replenishes the surface ice as it is lost. These findings support the theory that asteroids could have brought water to planet Earth, although proving it is another matter.

As well as bringing water to the planet, Nir Goldman and co-workers at the Lawrence Livermore National Laboratory and Stanford University in the US suggested that the early building blocks of life could survive hitching a ride to earth on a comet. Their computations found that the shock waves of a comet impact could promote short lived C-N bonded oligomers that then break up to form stable complexes containing glycine, an essential amino acid (CW October, p27).4

Life, but not as we know it

2010 also saw chemistry help investigate and explain biological phenomena. Craig Venter was back in the news again, this time for creating a synthetic bacterium by transplanting a chemically synthesised chromosome into an empty cell (CW July, p26).5 The man-made microbe was the work of a team led by Dan Gibson at Venter’s institutes in Rockville, Maryland and San Diego, California, US and can grow and replicate just like its biological counterparts.

Meanwhile, John Parnell and colleagues at the University of Aberdeen, UK found discrepancies in the 34S to 32S ratio in Scottish rocks (CW December, p18).6 The rock samples, from the north-west highlands of Scotland, suggested that complex life could have existed on Earth 400 million years earlier than thought.

Enzymes were made into playmates (CW online, October 23) by a team led by Milan Stojanovic of Columbia University in New York, US.7 The scientists created a biological automaton that could be taught to play tit-for-tat, and never lose. The automaton comprised a solution of 16 enzymes that could recognise and respond to ’moves’ from a human player, opening up a new avenue in molecular programming.

In the metallomics field, American scientists led by Michael Adams showed that scientists working in the field should shift their focus from classical protein-based purification to metal-based identification and purification. The team used Pyrococcus furiosus as an example and showed that of 343 metal peaks in chromatography fractions, 158 did not match any predicted metalloprotein. Purifying eight of these fractions gave four new metalloproteins, suggesting that metalloproteomes are larger and more diverse than first expected (Nature, DOI: 10.1038/nature09265).8

Light based chemistry continued to fascinate. Xueming Yang and Alec Wodtke investigated why methanol helps generate hydrogen from water using titanium dioxide and sunlight. They found that the methanol gives up it’s hydrogen to the bridge-bonded oxygen of the TiO2 (Chem. Sci., DOI: 10.1039/c0sc00316f).9 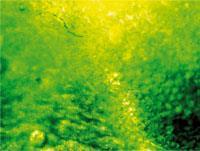 At the Photosynthesis Congress in Beijing, Jian-Ren Shen of Okayama University in Japan received a standing ovation after announcing that his group had managed to get the structure of Photosystem II at a resolution of 1.9A. The protein complex is the first protein in light dependant reactions and supplies all of the electrons needed for photosynthesis by oxidising water. The new understanding that this structure brings has huge importance for artificial photosynthesis and solar energy conversion.

In related work, Greg Scholes led a team based in Toronto and Sydney that investigated antenna proteins. These proteins absorb light and transmit the resultant excitation energy between molecules to a reaction centre where photosynthesis takes place.10 The team showed compelling evidence that the 5nm wide proteins share their electronic excitation in a quantum-coherent manner. The proteins exhibit this ’coherent wiring’ even under biologically relevant conditions, suggesting that distant molecules within the photosynthetic proteins are ’wired’ together for more efficient light-harvesting (Nature, DOI: 10.1038/nature08811).

And from using light in leaves, to making it. Taiwanese researchers diffused gold nanoparticles into plants to make chlorophyll to produce a red emission (CW December, p20). The idea is that these ’bio-LED’ leaves could be used like street lights.11

Culminating in the awarding of the Nobel prize in physics to Andre Geim and Kostya Novoselov (CW November, p8), graphene perhaps unsurprisingly featured heavily in the headlines in 2010. Geim’s group at the University of Manchester, UK themselves made a kind of 2D Teflon by completely fluorinating sheets of graphene without damaging the graphene sheet or its supports in the process. The resultant fluorographene is mechanically strong and chemically and thermally stable, and as well as being used like Teflon could be used as a thin insulator in organic electronics or find use in LEDs and displays (Small, DOI: 10.1002/smll.201001555).12

Speaking of displays, researchers in Korea and Japan made large graphene films that they then incorporated into touchscreen displays (CW August, p22).13 The graphene was doped with nitric acid to make it act like a large transparent electrode, ideal for touchscreen applications, and much stronger and more environmentally friendly than indium tin oxide, which is usually used for touchscreens.

As well as large sheets, several groups reported ways to make circuits using graphene. Graphene nanoribbons were built up using a new bottom up approach by European researchers (CW September, p33).14 The nanoribbons are about 1nm wide and built from a radical precursor on a metal surface, which allows the width and shape of the nanoribbons to be controlled. The identical shape of the nanoribbons means that the electronic properties are also controllable, ideal for nanoelectronics.

Graphene circuits were also made by a hot AFM tip that ’drew’ onto graphene oxide.15 The heat of the AFM tip reduces the graphene oxide and leaves behind conductive lines of graphene, just like with a pen on paper (CW July, p36). The same tip can then read what it has written, which is useful for quality control.

Real time transmission electron microscopy (TEM), used by Andrei Khlobystov at the University of Nottingham, UK made graphene curl up to make fullerenes and allowed the process to be observed at the same time (CW June, p22).16 This contradicts current theories of how fullerenes are made, which assumes near atomic carbon is needed. TEM and quantum chemical calculations explain that when a carbon atom is removed from the edge of a graphene flake of 60-100 carbon atoms, the two carbons left bonded to only two neighbours pair up, creating a pentagon. This causes the sheet to curl and as more carbons are removed, the sheet becomes a bowl and then a ball. Although these fullerenes are made using the electron beam of the TEM, the heat used in fullerene production could do the same job.

TEM was also used by some of the same team in collaboration with Chinese researchers (CW January, p29). They filmed metal atoms caged inside fullerenes that were held inside a carbon nanotube. The movie showed the metal atoms chewing their way out of the fullerenes before clustering and attacking the nanotube itself, proving that the interior of carbon nanotubes is not always as chemically inert as thought.17 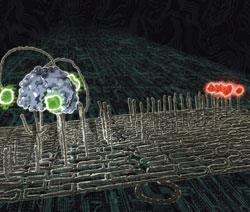 DNA walker moves along a fixed track on a surface

There was some fun with molecular machines again this year. David Leigh and collegues in Edinburgh made a two legged molecular walker that could walk along a track in one direction (CW February, p26),18 while Ben Feringa finally managed to make his rotary motors go in both directions (CW December, p19).19 The direction of rotation was changed by base induced epimerisation. Earlier in the year, Feringa had also produced a rotary motor that could be locked by changing the pH of the solution (CW February, p26).20

In the US, two separate teams helped move the idea of nanorobots working on assembly lines closer (CW June, p26). Milan Stojanovic’s team at Columbia University in New York made a ’molecular spider’ that could move along a fixed track, while Ned Seeman’s group at the University of New York, developed a nanoscale assembly line that can be programmed to ’manufacture’ products as a DNA walker moves down the line.21