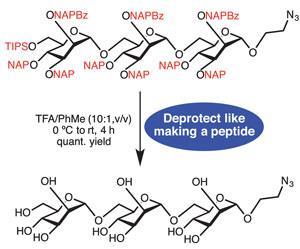 Scientists based in the US have developed a new strategy to simplify the chemical synthesis of complex carbohydrates.

Oligosaccharides are polymeric carbohydrates consisting of a small number of monosaccharide monomers. They are essential to all cellular organisms, playing vital roles in cell recognition and signalling.

Automated methods are routinely used to prepare biomacromolecules such as peptides and nucleic acids, but similar strategies in oligosaccharide synthesis are far less developed. Oligosaccharides contain a large number of hydroxyl groups which normally have to be protected orthogonally, i.e. in such a way that they can be unmasked independently of one another. This poses a great challenge to chemists and has hindered progress towards automated carbohydrate synthesis.

Classical protecting groups for hydroxyl groups include benzyl ethers, which are generally removed via hydrogenolysis or dissolving metal reduction, and acetate, benzoate or pivaloate esters, which are cleaved using base-catalysed hydrolysis. While these reactions are well established, a high level of training in practical organic chemistry is required to carry them out, in contrast to deprotection in automated peptide synthesis, which can be as simple as shaking the protected molecule with an acidic or basic solution.

Xinyu Liu and Yao Li at the University of Pittsburgh have developed a series of acid-cleavable PMB- and NAP-capped 4-hydroxybutanoic acid and 2-(hydroxymethyl)benzoic acid ester-type protecting groups that act as surrogates of acetate and benzoate. Trifluoroacetic acid (TFA) in toluene can simultaneously cleave all of these groups during the final stage of an oligosaccharide assembly to emulate the synthetic efficiency traditionally reserved for peptide chemistry.

Liu believes this innovation in oligosaccharide protecting group chemistry will ultimately lead to the acceleration of oligosaccharide synthesis in laboratories in both industrial and academic settings, a sentiment echoed by Binghe Wang, a carbohydrate chemist at Georgia State University in the US. Wang describes the work as a major step forward in developing new protection–deprotection strategies, which are critical to the carbohydrate chemistry field and expects the method to become very widely used.

Jeroen Codee, a carbohydrate chemist at Leiden University in The Netherlands says that in combination with the mild glycosylation methods already available, Liu’s methodology could become a powerful synthetic strategy. However, he cautions that the method would need to be proven with more examples in the future.