A US group of researchers has made a round bottomed flask from folded up DNA with an internal capacity of just 24000nm3, which would be enough to hold 800,000 molecules of water. The flask is 70nm high and 40nm wide and was made by stacking different sized rings of DNA on top of each other - the way in which so-called coil pots are made out of clay.

’We are inspired by both Nature and engineered architectural objects’ says Hao Yan, one of the group members at Arizona State University, US. Yan says Nature is full of objects with delicate curvatures.

Scientists have used DNA ’origami’, in which DNA is used as a structural material, to make rings before. But varying the size is difficult because DNA prefers circles with 10.5 base pairs per turn, and stacking those would just give a tube. Yan and colleagues found a way to control the folding of DNA to make bigger and smaller rings, as well as half rings, and used those to build up their ’nanoflask’. 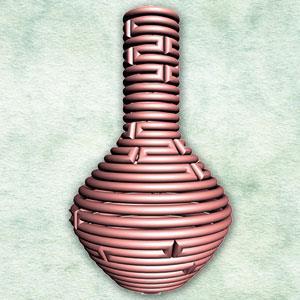 Yan Lui, another of the researchers involved in the study, explains that although DNA helices are thought of as straight lines, they are quite soft and flexible and can easily be bent and twisted: ’With designed crossover points at desired positions, DNA helices can be linked together so that different sized curvatures in and out of the plane can be achieved.’

Paul Rothemund at California Institute of Technology, US, who did much of the early work on DNA origami, says he is impressed by the flask. Research on DNA structures is moving very fast, he adds.

Of course, flasks made from DNA are unlikely to replace traditional glassware in the lab, but Yan and Lui say that the technique could be used to make templates for nanocrystals, artificial enzymes or capsules for drug delivery.

The team is now also working to make more elaborate structures from longer lengths of DNA, but they say that, for that, the pen and paper they’ve been using up until now might have to be traded in for computer-aided design software.