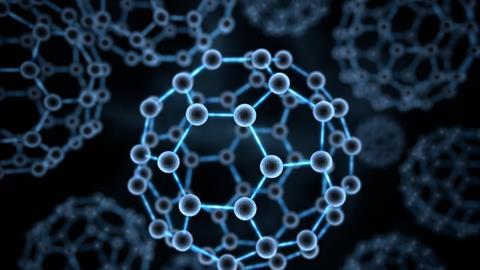 For the first time, researchers have used buckyballs as nano-flasks to observe the behaviour of monoatomic nitrogen.1 The work should inspire new ways to study highly reactive species.

When it comes to studying the reactivity of single atoms, glassware becomes useless. Hence, chemists have spent years developing molecular containers that can study these types of systems. However, the ‘nanocages’ may themselves be too reactive to imprison species such as single atoms or radicals. Now, a team of Japanese chemists has discovered how to tailor fullerenes to trap the most reactive species.

Yasujiro Murata, lead author of the paper and researcher at Kyoto University, explains how he ‘had the idea of nano-flasks 10 years ago’. However, it took him a long time to develop and complete all the experiments that led to this publication. The hardest part was ‘the synthesis of endohedral fullerenes’, he explains. The process requires mastery of an elaborate technique known as ‘molecular surgery’.

Murata uses chemical synthesis to open holes in fullerenes with the same precision glassblowers need to shape ordinary flasks. ‘Using organic reactions under mild conditions we construct an opening on a fullerene,’ he says. Then, they can place the molecules they want to study inside. ‘The key to the molecular surgery is that we can close the opening completely to re-generate the fullerene cage after the insertion,’ he adds. Murata used this same methodology to make a single molecule ‘water bottle’ back in 2011,2 and also applied it to observe hydrogen bond formation in a water dimer last year. 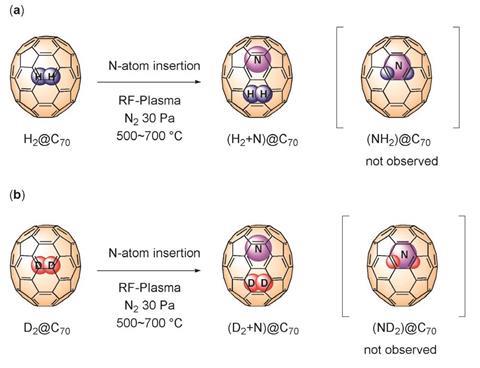 Murata’s team has now placed both a hydrogen molecule and a single nitrogen atom inside a C70 buckyball. They demonstrated the insertion was effective using high resolution mass spectrometry techniques. Then, they studied the system with electron paramagnetic resonance. Surprisingly, they discovered that atomic nitrogen and molecular hydrogen did not react, nor did atomic nitrogen and deuterium.

Nazario Martín, a leading expert in fullerenes at Complutense University in Madrid, Spain, finds the title of the paper a bit misleading. ‘At the end of the day, they don’t observe any reaction with monoatomic nitrogen,’ he says. ‘Nevertheless, the idea behind this paper is fascinating, and the molecular surgery processes are really impressive,’ he adds. Martín also thinks this achievement opens up a myriad of possibilities. ‘If we could trap two nitrogen radicals, we could observe the formation of a nitrogen molecule inside a fullerene. That would be ground-breaking,’ he concludes.

Murata shares this vision, and hopes to observe reactions between bigger molecules soon. ‘To do it, we need to develop molecular surgery for higher fullerenes, which should be challenging,’ he explains. He also wonders about the future applications of fullerene nano-flasks. ‘We can generate new stable radical species, which would be key materials for quantum computing,’ he adds.