Carbyne radicals - carbon atoms with one bond and three non-bonding electrons - could survive in aqueous solutions after being ejected from metal complexes, claim researchers in Israel. The results could have a profound influence on our understanding of metal-carbon bonding.

Avi Bino from the Hebrew University of Jerusalem has been trying to get to the bottom of how metal carbyne clusters (complexes with three metal-carbon bonds to a carbyne ligand that bridges three metal atoms) couple together to form alkynes (with C-C triple bonds) for over 30 years. His latest batch of experiments points to the unlikely conclusion that, in water, the complexes release free carbynes into solution. These can apparently then react in a multitude of ways to produce a host of different organic molecules, and even survive long enough to react with each other and form alkynes. 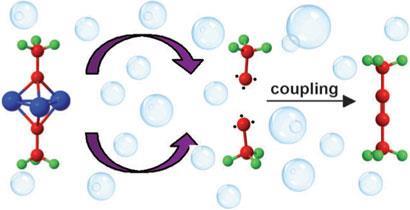 Bino proposes that carbyne radicals are ejected from molybdenum clusters in water and react together to make lots of organic molecules, including alkynes

’We were initially convinced that the coupling reaction to form alkynes was intramolecular,’ says Bino.1 But as the team investigated the mechanism, it became clear that more than one molecule was involved. They were then faced with two options: the first is a collision of two complexes, which Bino has discounted on the evidence of their experiments, ’so we were left with the crazy option that the carbyne radicals are ejected into solution,’ he adds.2

’If the analysis is correct, then it’s a very interesting observation,’ says Alexander Filippou from the University of Bonn in Germany, who has worked on related mononuclear metal carbyne complexes. However, he adds that there are other possible explanations for the team’s findings, and would need to see unambiguous experimental evidence to be completely convinced. If these carbynes survive long enough to react with each other it is very surprising, he adds, ’I would expect these carbynes to be extremely reactive and react immediately with water.’

Bino agrees that the conclusions are unexpected, and is working on more experiments to confirm and probe the findings in more detail. ’We have some promising results which we hope to publish soon,’ he adds.