Drugs to blame for anti-social fish 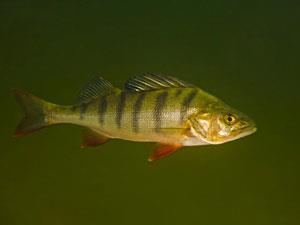 The European perch's behaviour is affected by common anti-anxiety drugs

Anti-social fish in your waterway? Perhaps you shouldn’t blame their parents but trace amounts of drugs used to treat anxiety. That's the finding of Swedish scientists who say that low levels of psychotherapeutic drugs can change the way fish behave and could be altering the balance of entire aquatic food webs.

Common pharmaceuticals like the anti-anxiety drugs benzodiazepines end up in sewers as they are excreted by the people taking them. Conventional wastewater treatment doesn't destroy these types of drugs, however, and they are also  remarkably resistant to photodegradation, meaning that they persist in rivers and streams.

As pharmaceuticals like benzodiazepines can alter human behaviour it has been suspected for some time that they might also have an effect on aquatic organisms. Surprisingly however, no investigations into whether or not these psychotherapeutic drugs have been altering the way aquatic wildlife acts has been carried out until now.

To check on whether low doses of benzodiazepines can affect aquatic life, Tomas Brodin and colleagues from Umeå University first looked at drug concentrations downstream of a sewage treatment plant on the river Fyris in Sweden. They found concentrations of up to 0.58µg/l of the common anti-anxiety drug Oxazepam. This is similar to other waterways in Europe and the US. But when the researchers looked at levels of the drug in fish from the Fyris they got a surprise. It was more than six times that found in the river, demonstrating that the drug bioaccumulates. Co-author Jerker Fick points out that the levels of the drug in the perch are still tiny though. 'You'd need 4 tonnes of perch from the river to get just one tablet of the drug,' he notes.

To see what effect this low-level exposure to benzodiazepines was having on the fish the team examined how personality traits, such as boldness, activity and social interaction changed when they were exposed to 1.8µg/l of Oxazepam. Activity was simply a measure of how much the fish darted about in their tank. Boldness was measured by how often the fish entered a new area of the tank, while social interaction was judged by a fish’s willingness to get in the personal space of another.

Fish exposed to the drug at similar levels to those found in Europe’s and America’s waterways were around 50% more active and significantly less social. Perch swimming in waters with a much higher drug dose of 910µg/l were also more active and less friendly, and also much, much bolder. They also found that the fish were hungrier and ate faster.

The authors describe the effects that trace amounts of a single drug can have on food webs as ‘alarming’. They point out that the sorts of behavioural changes that the fish have been experiencing could alter their evolutionary fitness by making them easy prey for predators or even put pressure on perch's primary foodstuff, zooplankton.

They say that now that it is clear that psychoactive drugs can affect aquatic animals, new testing regimes need to be put in place to see what other effects these types of drugs might be having on these ecosystems. 'The solution to this problem isn't to stop medicating people who are ill but to try to develop sewage treatment plants that can capture environmentally hazardous drugs,' Fick says.