Zapping chocolate with electricity may sound like something that only the eccentric fictional chocolatier Willy Wonka might have tried, but that’s exactly what US physicists have done in order to make low-fat chocolate. They suggest their invention could lead to healthier and tastier chocolate and help tackle the growing problem of obesity. 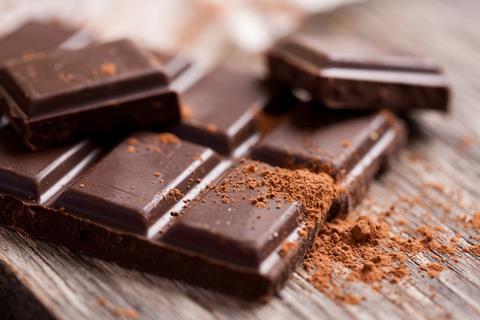 There’s a reason why chocolate isn’t healthy – each glorious mouthful typically contains 40% fat by volume due to the presence of cocoa butter, which gives chocolate it’s characteristic melt-in-the mouth quality and texture. Lower-fat alternatives do exist, but many countries do not allow these products to be labelled as chocolate because the cocoa butter is replaced with substitutes. Moreover, some of these additives are prohibited in certain countries, such as Proctor & Gamble’s Olestra, which although approved by the US, is banned in Canada and several European countries.

A true reduced-fat chocolate would still contain cocoa butter, but less of it. However, manufacturers have struggled with this because reducing chocolate’s fat content increases the viscosity of melted chocolate, clogging up production pipelines. Now, it turns out that applying a small electric field is all that’s required to keep it flowing.

Rongjia Tao and colleagues at Temple University, Philadelphia in the US, made the discovery after inventing a new electrorheological (ER) method that reduces the viscosity of liquid suspensions. The traditional ER method – often used in hydraulic braking systems – uses an electric field to jam the flow of particles in a suspension, which reversibly increases the viscosity of a liquid to a gel-like solid. Tao’s method reversibly reduces viscosity because the electric field is applied in the same direction of flow rather than perpendicular to it. This causes particles to form small chains thereby preventing them clogging. Tests showed that Tao’s team’s ER method could halve the viscosity of liquid chocolate from several major brands that had up to 20% less cocoa butter allowing them to flow smoothly.

But what about the all important taste test? ‘We could not taste any difference between the ordinary chocolate and reduced fat chocolate,’ says Tao. He adds that some taste testers even thought the low-fat chocolate had a better flavour.

Stefan Bon, at the University of Warwick, UK, who developed a way to make a low-fat chocolate by substituting cocoa butter with tiny droplets of fruit juice thinks the application of an electric field is an interesting solution. However, he has reservations. ‘When you take fat out of chocolate you have to replace it with something else, such as solid cocoa particles or sugar, to keep the mass of the chocolate bar the same,’ he explains. ‘Cocoa is expensive, sugar is cheap. It is up to the chocolate manufacturers to decide what to do with the technology, and hopefully they will not replace fat with sugar.’