An electric field can be tuned to selectively catalyse one reaction – an aromatisation – in a multistep cascade, researchers in China have discovered. The experiment, run in a nanoreactor with individual molecules, shows how the electrostatic field speeds up the aromatisation by an order or magnitude.

Although the first proof that an electric field can catalyse a Diels–Alder reaction only came in 2016, three decades after the idea was first proposed, chemists see great potential in harnessing the power of electrostatics. Unlike in redox reactions, there is no electron transfer during electrostatic-induced reactions and no change in the reactants’ oxidation states. Field catalysis could not only speed up certain processes or supress unwanted side reactions, it could also give access to compounds that are hard to make by other means.

‘Electrostatic-induced reactions is certainly one of the hottest topics in chemistry these days,’ says molecular electronics researcher Nadim Darwish from Curtin University, Australia, who wasn’t involved in the study.

Scientists have now made another step towards controlling chemistry with electric fields. For the first time, they tuned the field’s orientation so that it only catalyses one reaction in a two-step cascade.

2,3-Dihydrofuran and a tetrazine first react in a Diels–Alder reaction, creating a fused bicyclic dihydropyridazine system. This is unstable because the non-aromatic compound re-aromatises by breaking a carbon–oxygen bond and shuffling around a hydrogen to produce a pyridazine derivative. 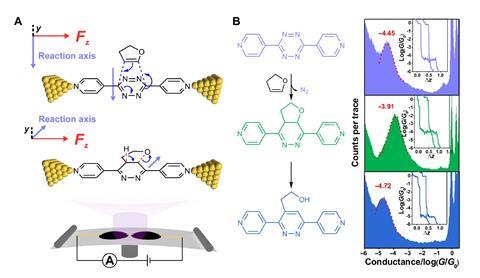 The Chinese team was able to speed up the aromatisation step in a reaction by an order of magnitude using a powerful electric field. The caveat is that the experiment was done in a nanoreactor working with a single molecule

The Diels–Alder step is unaffected by the electric field, because its reaction axis – the direction in which bonding is rearranged from reactant to product – sits at a right angle to the field lines. The aromatisation’s axis, however, lies in the same plane as the field, and the process is sped up – by an order of magnitude – compared with the same reaction run in a test tube without an electric field.

Simone Ciampi who co-leads the interfaces and nanoelectronics group with Darwish at Curtin University, calls this reaction rate increase ‘impressive’. While this is not the first electrostatic-induced reaction, it is the first experiment ‘to test beyond doubt that catalytic effects by electric fields on organic reactions are very direction-dependent’, says Ciampi.

‘The work will certainly raise a lot of attention, and become a landmark study, much like the one published in 2016,’ says Sason Shaik from the Hebrew University of Jerusalem, Israel, who kickstarted the field with his theoretical studies in the 1980s.

One of the study’s lead scientists, Junyang Liu from Xiamen University, explains that the electric field increases a C–H bond angle during a critical step of the aromatisation. ‘[This] enhances the stability of the transition state and decreases the reaction barrier,’ he says. The higher the team set the field’s voltage, the greater the aromatisation rate increased.

It might, however, be some time until synthetic chemists can use field catalysis in their labs. Liu and colleagues’ experiment is carried out in a nanoreactor, in which a single molecule connects to atomically thin gold electrodes through its pyridine anchors. Although the electrode voltage is set to only 200mV at most, each molecule experiences an electric field of up to one billion Volts per metre once it sits inside the reactor.

‘If we want to scale up to bulk chemistry, it will be very difficult to create such a high electric field,’ Liu says. However, he thinks that continuous flow techniques that channel reagents through a microsized electric field reactor could be the answer.

‘It is a matter of short time before products, that we can touch and smell, will come out of this,’ Darwish says. ‘There are vast new horizons to explore here – a new area of research has emerged of which we don’t know the full potential and ramifications on chemical synthesis yet,’ Shaik says.